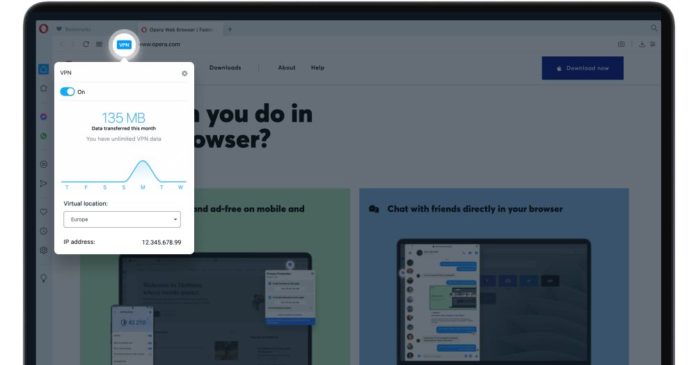 Opera has long been one of the most popular alternative web browsers, with its products counting more than 380 million users worldwide. These would include desktop and mobile device users, as well as those using it on other platforms such as gaming consoles.

What made Opera stand out “back in the day” when it was announced were innovative features that have since found their place among today’s market leaders like Chrome, Edge and Firefox. Among these are tabs, popup blockers, and integrated search.

Adding to the rich feature set is the RAM-friendly “nature” of Opera that, consequently, makes it faster and battery friendlier than competing products.

What about Opera VPN?

Opera is one of the very few web browsers that come with integrated VPNs which, just like the browser itself, is free to use.

But… Don’t expect Opera’s built-in VPN to work like the best VPNs out there. Simply put, it doesn’t have the “horsepower” needed to unlock every piece of content you could think of and may not be sufficient for bypassing censorship in high-censorship countries. Still, it will keep your connection that much more secure when you’re connecting to public Wi-Fi networks. At least in the browser, whereas other apps won’t get the same benefit.

Actually, for mobile devices, Opera has a free, standalone VPN app, but here too you shouldn’t expect the service that is on par with what the top VPNs are offering.

In order to start using the Opera VPN, all you have to do is enable it in Settings, after which your VPN status will appear just to the left of the address bar.

You get to choose between a few server locations, including Canada, Germany, the Netherlands, Singapore, and the United States. By default, Opera will select the best performing server, which is probably the closest to you. In comparison, the best VPNs have thousands of servers spread across 50+ countries.

Also, Opera VPN uses AES-256 encryption and OpenVPN to ensure your data is secure. While that used to be our favorite protocol, today we prefer WireGuard which tends to deliver the fastest download and upload speeds.

Ad blocking and private mode are included as well

Aside from offering an integrated VPN, Opera’s web browser also comes with a built-in ad blocker that is meant to declutter web pages and make them more readable. Also, it will speed up browsing and reduce third-party tracking. Still, you can fine-tune it to show ads on some sites — which, we think, is the right thing to do as it helps pay for the content creators.

However, we must add that Opera will automatically allow several major sources of ads without allowing you to block them. Guess they don’t want beef with major ad companies.

Another cool feature of Opera is its private mode, in which history, cache, and cookies aren’t saved upon exit. Also, there are fraud and malware protections included to block malicious sites.

All in all, we applaud Opera for making an extra effort to make its browser better, or at least different, than the rest of the pack. Even though it uses the same Chromium code as Google’s Chrome, Opera has found a way to make its offering slightly different and still get new users on board.

You can download it from Opera.com. Nevertheless, we suggest using it with a full-blown VPN. Your data and privacy are on the line, after all.