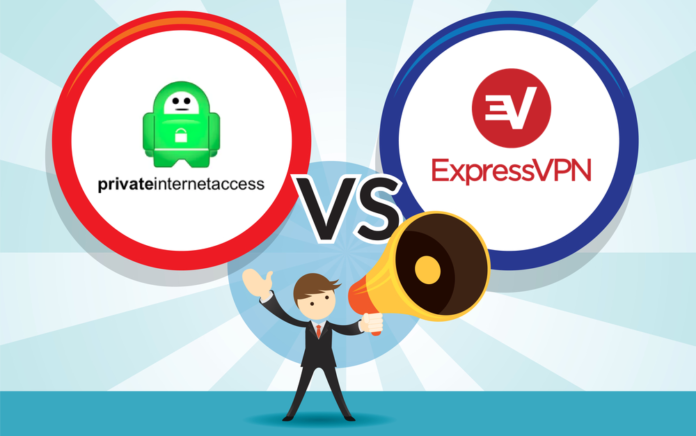 Private Internet Access (PIA) and ExpressVPN are among the best VPNs money could buy, the latter being slightly more expensive option. ExpressVPN is also more popular but PIA also has its fans, notably because of its amazing browser extensions. Both offer top-notch security and rock-solid experience across platforms… Let us dive into details.

Here’s how the two VPNs compare point by point…

Servers & Locations
Private Internet Access and ExpressVPN have comparable networks of servers, each counting more than 3,000 machines. However, ExpressVPN covers 160 locations across 94 countries, while PIA’s servers reside in “only” 52 locations across 32 countries. For what it matters, PIA emphasizes it doesn’t deal with virtual but bare-metal servers exclusively, which should reportedly make for “enhanced security and performance.” In contrast, ExpressVPN doesn’t tell us what kind of servers it uses, so we presume at least some of them are virtual — though they should get the job done, as well.

Platforms
Both PIA and ExpressVPN offer apps for all popular platforms — including Windows, Mac OS, Android, iOS and Linux — while also allowing users to set up their routers so that their entire home or office network could benefit from more secure internet access. This way, users can also connect such devices as smart TVs, gaming consoles and streaming boxes to a VPN. PIA wins on the number of simultaneous connections — it lets users connect up to 10 different devices, whereas ExpressVPN tops at 5 (though one of those devices could be your router to cover the entire network). This, we guess, is intentional and part of ExpressVPN’s idea to market its offering as premium.

Speed
In a tight race between the two titans, we must give a slight edge to Private Internet Access, but… There is one important “but” here and it has to do with server locations. If you are connecting to nearby servers from North America and Europe, PIA will be faster for you. On the other hand, if you’re connecting from or to other parts of the world, well – ExpressVPN will deliver faster download speeds. This has to do with the fact that its network includes servers that are spread all across the globe, covering 90+ countries.

Security & Privacy
As top tier providers, both PIA and ExpressVPN support most popular protocols such as OpenVPN, super-strong AES-256 encryption, and a kill switch. Also included is a promise of zero IP and DNS leaks, as well as the zero logs policy. ExpressVPN is based in British Virgin Islands whereas PIA is a US-based company. For what it matters, we prefer to use a VPN that is not based in the US (and EU for that matter).

Ease of use
PIA and ExpressVPN have easy-to-grasp apps that enable connections to VPN servers in just a few clicks/taps. Advanced options, should you need them, are also nearby — letting the tech-savvy tinker with various settings. In a nutshell, we would say there are no major differences between the two services, though we must add that PIA’s browser extensions are more powerful than those offered by ExpressVPN. On the other hand, PIA doesn’t offer live chat support, whereas that option is available round the clock with ExpressVPN. And that, in case you wonder, is what we prefer.

Streaming & Torrenting
PIA may be faster in some areas, but ExpressVPN will unlock all the content you can imagine, including BBC iPlayer. To be fair, PIA can also be used for accessing BBC’s content, but it doesn’t work every single time. What it works great for is torrenting, with all of its servers supporting P2P traffic. ExpressVPN is also one of the best VPNs for torrenting but in our tests, PIA was faster. For what it matters, we were connecting from Europe to a server in the U.S. If you’re connecting from, say, Asia or Africa to the U.S. – you may get different results.

Bypassing censorship
PIA can be used in China, but you will have to tinker with settings and switch servers in order to make that happen. In contrast, ExpressVPN tends to work out of the box, even though it too may experience problems from time to time. This has little to do with how these two VPNs are working and everything to do with the Chinese government’s ongoing crackdown against VPN service providers. At the time of this writing, ExpressVPN is still holding ground and we think it’s one of the best options for bypassing the Great Firewall of China… as well as any other restrictions you may encounter along the way. In case you wonder, those “other restrictions” — i.e. in other high censorship countries — could also be handled by PIA.

Pricing
ExpressVPN dubs its VPN the premium offering and is thus one of the most expensive services on the market. We do think it’s worth the money, but could also understand that not everyone wants to pay the premium for a VPN service — i.e. if you’re not going to use it too frequently or need it to access some content from your work or school. Both services include a money-back guarantee, and will accept all the popular credit cards, PayPal and even select cryptocurrencies. As that’s usually the case, the longer you commit — the better deal you’ll get.

Except if you’re on a Chromebook and don’t need it to access sites like Facebook from China, you should get ExpressVPN. It too has a solid Chrome extension but the one offered by Private Internet Access is the best. Period.

For everything else, ExpressVPN is the king. In fact, it consistently managed to top our charts, ticking all the right boxes, every single time. It’s fast, secure, has all the key features, offers round the clock support and so on. Whether you need a VPN for work, play or when traveling abroad – ExpressVPN won’t let you down. Yes, we highly recommend it!