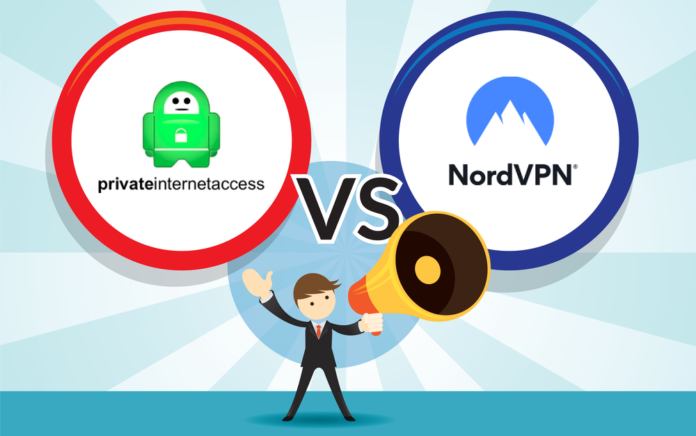 Private Internet Access (PIA) and NordVPN are among the most popular VPNs out there. While NordVPN has been around for years, PIA is a relatively new player. Nevertheless, it has managed to find its place in the competitive market, offering super-fast download speeds and amazing browser extensions. But I’m getting ahead of myself, let’s see what these two are all about, shall we?

Servers & Locations
Private Internet Access operates more than 3,000 VPN and proxy servers in 52 locations across 32 countries. The company emphasizes it doesn’t deal with virtual but bare-metal servers exclusively, which should reportedly make for “enhanced security and performance.” In comparison, NordVPN’s network extends to over 5,000 servers spread across 60+ countries. It doesn’t specify what “kind” of servers it uses, but obviously – it has more firepower to offer to its users.

Platforms
It’s a draw at first glance, with both PIA and NordVPN offering apps for all popular desktop and mobile platforms, while also including router support — which consequently lets users “cover” other connected products around their homes and/or offices such as streaming devices, smart TVs and gaming consoles. PIA, however, offers much better browser extensions. It also lets users make 10 simultaneous connections, whereas that number tops at 6 with NordVPN.

Speed
NordVPN is fast but PIA is a speed demon. We’re not sure how they manage to offer such speeds (and low latency), but we’re guessing they don’t have as many users as NordVPN does — so their servers are not as busy (as those operated by NordVPN). This is true in pretty much all settings except if you’re connecting to/from locations that are better covered by NordVPN — local connections tend to deliver faster speeds. For most users though, PIA is faster.

Security & Privacy
All of the high-end security & privacy features come included with both NordVPN and PIA. These include support for a few different protocols, including OpenVPN, super-strong AES-256 encryption, a kill switch, and a malware blocker. All this is coupled with a promise of zero IP and DNS leaks. Speaking of which, both services have a zero logs policy, which is always a big plus in my book. For what it matters, PIA is a US-based company while NordVPN operates from Panama.

Ease of Use
Both PIA and NordVPN offer easy to use apps with all the common features being just a click away. Advanced features are also nearby, and tend to be revealed by clicking / tapping on the so-called hamburger menu. As noted above, PIA offers comprehensive browser extensions that are arguably the best on the market. Most users, however, won’t be playing too much with all the extra bells and whistles as the default settings easily get the job done. Should a problem arises, NordVPN offers round the clock chat support; for one reason or another, that level of support is not available with Private Internet Access. So we would have to give this round to NordVPN.

Streaming & Torrenting
Except if you’re looking to regularly access BBC iPlayer, both PIA and NordVPN will work for you, letting you access all the streaming content can chew along with the ability to download files via BitTorrent. For fans of the British entertainment (and other media from BBC), we can’t but suggest NordVPN which worked better for us. We did manage to access BBC iPlayer with PIA, but it didn’t work out of bet — we had to play around with it until we’ve found a server that works. When it comes to torrenting, we would say it’s a draw with both PIA and NordVPN delivering fast download and upload speeds. Whereas NordVPN has servers dedicated to P2P traffic, all servers in PIA’s networks are P2P enabled.

Bypassing censorship
NordVPN is a winner here, even though it won’t work in China at all times. The situation is more complicated with PIA, as it requires users to manually tweak settings. In other words, it is possible to bypass the Great Firewall of China with NordVPN and PIA, but don’t expect a one-click solution. You will have to tinker with settings and change servers until you get it working. If you’re tech-savvy, this shouldn’t be a problem — but most people are better off getting a different VPN if they need it to work in China. As for other high-censorship countries, both PIA and NordVPN are up for the task and should be able to let you access popular social media sites whenever you fancy.

Pricing
At first glance, NordVPN costs less per month but its best price requires that you get a 3-year subscription — that shouldn’t be a problem considering that we’re talking about one of the best VPNs on the market. On the other hand, Private Internet Access won’t break your bank even if you opt for a 1-year plan. Both services offer a money-back guarantee that is good for 30 days. NordVPN also won’t accept PayPal payments while PIA will gladly take them. Both services could be paid with your crypto assets (if you have some).

If you have a Chromebook, get Private Internet Access which offers one of the best browser extensions we’ve seen. Also, due to low latency – we suggest PIA for heavy gamers. For everyone else, NordVPN is a clear choice with its vast network of servers consistently delivering high speeds. It is one of those services you can rely on, every single time. Except if you live or work in China, that is — NordVPN could work there, but there are better services for China.