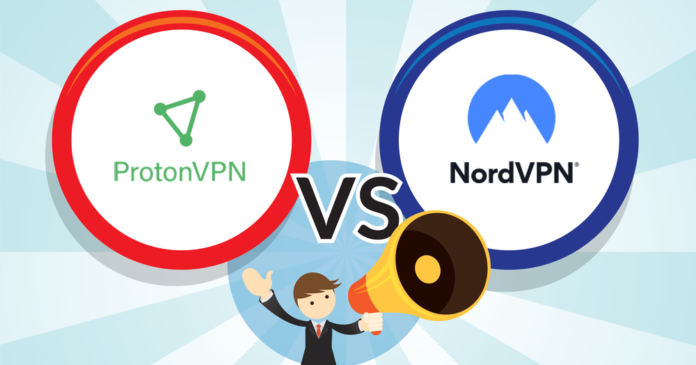 If you know something about VPNs, you know that NordVPN is the top dog in this game. But, obviously, it is not the only game in town with a few other companies also offering great service. One of them is ProtonVPN, which got into prominence for its encrypted email service, ProtonMail, and has only later expanded into the VPN market. Today, it has a solid audience but can it compete with an industry giant like NordVPN? Let’s see how the two compare…

Here’s how ProtonVPN and NordVPN stack against each other…

Servers & Locations
ProtonVPN has what we would consider a mid-sized network with around 1,000 servers spread across more than 54 countries. In contrast, NordVPN’s network counts over 5,000 servers in 60+ countries, which help it deliver super-fast download (and upload) speeds. All of the popular countries in Europe, Asia and the Americas are covered, making sure users from pretty much anywhere can safely use the service. So this round goes to NordVPN.

Platforms
All major platforms are supported by both ProtonVPN and NordVPN — including Windows, macOS, Android, iOS and Linux. Furthermore, both services can work with routers, allowing you to connect other devices (which lack native apps) to the VPN. Plus, with NordVPN you also get dedicated browser extensions, which can come in handy — though the desktop apps will work just as well. A single ProtonVPN (Plus) license provides for 5 simultaneous connections whereas that number is 6 with NordVPN.

Speed
NordVPN is faster. It’s that simple. In all of our tests, it managed to beat ProtonVPN but that doesn’t mean ProtonVPN was slow. It managed to deliver solid speeds as well — which are perfectly suitable for streaming, torrenting and browsing the web. I’m not so sure ProtonVPN would be a good companion for online gaming, though — at least not in all parts of the world (depending on the gaming server’s location).

Security & Privacy
Another round where we have to give a slight edge to NordVPN since it has already implemented the WireGuard protocol whereas ProtonVPN has yet to do that. Said protocol delivers super-fast connections and we expect Proton to follow suit in the near future. In the meantime, it is worth knowing that Proton is based in Switzerland, which is widely considered to have the best privacy protection laws in the world. In comparison, NordVPN has an HQ in Panama, which is also a good option — as it doesn’t have intelligence-sharing agreements with other countries.

Ease of Use
NrodVPN’s apps look super modern and more polished than those offered by ProtonVPN. Then again, it’s not like you won’t find your way around any VPN app — the process of connecting is rather simple: select the country and server, and click “Connect.” And that’s it – you’re good to go. For what it matters, for those who need it – both apps also provide users with quick access to advanced features.

Streaming & Torrenting
This round is a tie and you can expect to get a buffer free streaming experience with NordVPN and ProtonVPN alike. When you think about it, streaming is not that demanding in the first place — even if we’re talking about 4K videos. Today’s codecs are rather powerful and are capable of shrinking the amount of data you receive to something that is quick to download. And the situation is similar with torrenting – expect to get great download and upload speeds with both services.

Bypassing censorship
NordVPN may be one of the top services that is being blocked around the world — it is one of the most popular VPS, after all — but it still manages to get around various restrictions, including those imposed by authorities in high-censorship countries like China. Sure, you may have to switch between multiple servers, but in the end – you should be able to find the one that gets the job done. I’m not sure that is possible with ProtonVPN, though I must add that we weren’t able to test this ourselves. For places like schools and universities, you can “get away” with either of the two VPNs.

Pricing
NordVPN is not only better, but it’s also more affordable if you sign-up for its longest-term plan. However, it doesn’t accept PayPal payments whereas such an option is available with ProtonVPN. On the other hand, NordVPN does accept various cryptocurrencies while ProtonVPN won’t take your crypto money. Both services offer a 30-day money-back guarantee.

Our money goes to NordVPN. It managed to beat ProtonVPN in pretty much all categories though we must give a major point to Proton for being based in Switzerland.

NordVPN has one of the biggest networks on the market and is able to consistently deliver fast Internet connections. It is one of those services you won’t even know it’s running in the background, but you’ll definitely be benefiting from the extra privacy and security NordVPN provides. We highly recommend it to both newbies and experts.