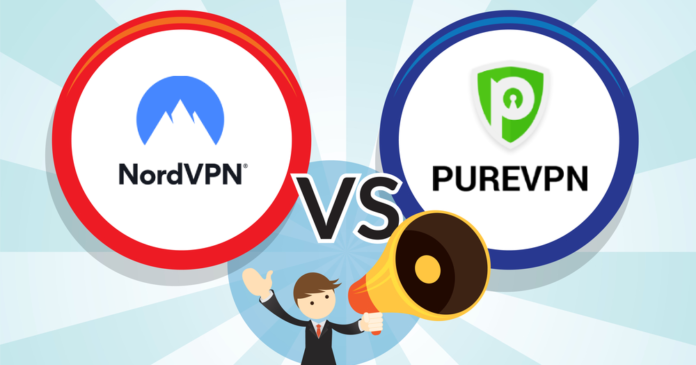 PureVPN and NordVPN are among the top VPNs, both offering amazing features suited for all kinds of users. NordVPN is a bigger player though, boasting a larger server network that can, obviously, deliver better overall experience (read: speed). Nevertheless, both companies have a place in the fast-growing (VPN) market and both have solid userbases.

Let’s take a look at the two VPNs in more detail, shall we?

The point by point analysis is below…

Servers & Locations
PureVPN has more than 2,000 servers spread across 180+ locations in 140+ countries, giving it an edge over many VPNs out there. NordVPN, on the other hand, has 5,000+ servers in 60+ countries, which help it deliver blazing-fast download speeds. It covers all the popular countries in Europe, Asia and the Americas — but it lacks some locations PureVPN covers (despite NordVPN having more servers). So, we would call this round a tie, with PureVPN winning on the “locations front” and NordVPN in the “number of servers” part.

Platforms
Both NordVPN and PureVPN support all major platforms — including Windows, macOS, Android, iOS and Linux. Furthermore, both can work with routers, enabling other devices (which lack native apps) to benefit from more secure connections. Plus, each of the two VPNs provides users with dedicated browser extensions to further streamline the experience. This is especially handy when you just want to change your IP address in the browser — i.e. to access YouTube from your workplace.

Speed
NordVPN is faster. Period. In all of our tests, NordVPN managed to beat PureVPN but that doesn’t mean PureVPN was slow. It managed to deliver solid speeds as well, making it perfectly suitable for streaming, torrenting and browsing the web. I wouldn’t count on it for online gaming, though — except if you’re competing in the country where PureVPN has a server and NordVPN doesn’t. Then, we presume (cause we haven’t been able to test this), PureVPN would win.

Security & Privacy
PureVPN and NordVPN are both considered “top dogs” thus they support a slew of protocols, but as of this writing – only NordVPN supports WireGuard. Said protocol is the latest tech in VPN, capable of delivering faster speeds that other standards like OpenVPN (which is supported by both NordVPN and PureVPN, BTW). Both services have a zero logs policy, with NordVPN winning on the privacy front because it’s based in Panama – which doesn’t have intelligence-sharing deals with other countries.

Ease of Use
We would call this a tie as both NordVPN and PureVPN are equally easy to use. NordVPN apps look more polished though, but that doesn’t mean you will get lost in PureVPN’s UI. After all, we’re talking about a relatively easy to use service that prompts you to select a server, click “connect” and you’re good to go. A VPN will do all of its magic in the background, routing traffic coming to and from your devices to the VPN server — and from there to the website or service you’re accessing.

Streaming & Torrenting
Another tie round as both services deliver great streaming and torrenting experience (read: speed) you can rely on. You’ll be enjoying buffer-free videos even if you’re streaming in 4K. After all, modern codecs do good work in shrinking the number of megabytes you’re downloading when watching videos – so there are no special requirements here. We’ll see whether the situation changes when 8K videos become standard, though.

Bypassing censorship
NordVPN wins this round, even though it won’t work in China at all times. In other words, you can hardly rely on PureVPN to bypass the infamous Great Firewall of China, but you could use it in other high-censorship countries, where — we’re hearing (as we weren’t able to test ourselves) — it works out of the box. And so does NordVPN, in case you wonder. The situation is similar in other places where your Internet may be limited, like schools, universities, workplaces and so on.

Pricing
The pricing of most VPNs is similar, but with the longer-term subscription – you get an amazing deal from NordVPN. Since it is our top pick, we advise you to go for their longest-term plan. After all, you can always get your money back if you decide it doesn’t work for you during the first month — that’s what the money-back guarantee is meant for. PureVPN is also not that expensive, but it lacks such longer-term plans that give you better deals. What it does have is a 7-day trial for $0.99 that is available with a 1-year plan. Perhaps you want to check that out.

To sum it up, our money goes to NordVPN. It managed to beat PureVPN in many categories despite having fewer locations.

NordVPN has one of the biggest networks on the (VPN) market that can consistently deliver fast download and upload speeds. It is one of those services you’ll love not to know about, as it will do all of its work in the background. We highly recommend NordVPN to newbies and experts, alike.