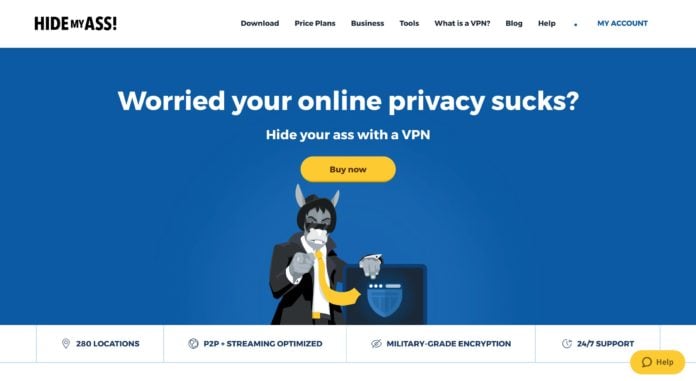 HideMyAss! has a vast number of servers in its network, making sure its users get fast download and upload speeds. Also, the service works with popular streaming services such as Netflix and BBC iPlayer, and can also be used for torrenting. Let's look at the details, shall we?

HideMyAss! has a big network of servers spread all across the world; specifically, it operates over 940 servers in 280+ locations covering more than 190 countries. That's an impressive number of countries when you think about it, and HideMyAss! is proudly presenting all of its servers on an interactive map.

If maps are not your thing, you can also browse the list and see how many servers HideMyAss! has in every country and even where in those countries (which cities) said servers are located.

HideMyAss! will work on all popular devices and platforms, both desktop and mobile. For platforms that don't have their apps, the company provides detailed manual setup guides so that these devices could also benefit from its VPN service.

Routers are one of those devices, and what's especially neat is that you can buy a router with the HideMyAss! service pre-installed. Setting up a router is also the only way to have your streaming devices and gaming consoles connected via VPN.

Additionally, there are also browser extensions that work like proxies. In other words, they won't keep you 100% anonymous, but you will be able to access geo-restricted content and services. This is not a flow, and it is how most VPN extensions work if you use them without the full-blown desktop app.

A single HideMyAss! license lets you run it on up to 5 devices at the same time.

HideMyAss! will not only "hide your ass" but will also deliver fast download and upload speeds, making the service great for an array of use cases -- from accessing forbidden websites to torrenting and video streaming.

HideMyAss! connects fairly quickly each time, and once connected - it provides users with very little fluctuation in performance and barely any connection dropouts.

Unsurprisingly, local connections are fastest but even those on the other side of the planet -- like Australia -- still deliver decent speeds, which are enough to enjoy Ultra HD streams.

HideMyAss! relies on the OpenVPN protocol and AES-256 encryption, which is a standard combo among the top-tier VPN service providers.

The company also operates its own DNS servers; and provides a kill switch functionality that kicks in if a connection suddenly drops out, along with DNS and IPv6 leak protection.

These days, folks looking for a VPN that will truly keep their identity under the radar can safely sign-up for HideMyAss! It wasn't always like that, though. Until May 2020, the company used to collect too much data for our taste; then, it switched boats and is now a zero data-logging VPN, with no identifiable data being collected on users to ensure complete online privacy and anonymity.

There could be one (tiny) problem, however. As a UK-based company, HideMyAss! is subject to UK's data laws which have actually helped the rise of VPN usage within the country. Then again, with no data being collected, there is little any government agency could do even if HideMyAss is asked to provide them with data.

HideMyAss! is super easy to use even for those who haven't used a VPN before. Simply select the server -- you can browse or even easily search for it -- click "connect", and you're good to go.

The Options menu is as straightforward as possible with clearly labelled menus, allowing even the tech newbies to browse around advanced features.

Speaking of which, some of them are not available on HideMyAss!'s mobile apps, like the kill switch. For what it matters, this is something many VPN mobile apps lack.

Finally, if you stumble during the setup process, you can always consult comprehensive set-up guides on the HideMyAss! website.

24/7 live chat support is increasingly becoming standard among the VPN service providers, and HideMyAss! is not an exception -- it too will let you ask any question you may have whenever you want.

Additionally, you can also consult HideMyAss!'s extensive knowledge base online as well as video walkthroughs to solve the issues you may have.

In most cases though, you won't need to do that with HideMyAss! working "out of box" for most users.

HideMyAss! has dedicated servers for the most popular streaming services, making it easier to tune into your favorite shows, movies or whatever you are looking to watch online. In fact, we would say that HideMyAss! is one of the best VPNs you could use for streaming -- it works with Netflix, BBC iPlayer, Hulu and others.

Torrenting works on all HideMyAss! servers, but for the best performance you should check the documentation provided on the company's website. Alternatively, you can contact support which will happily recommend you options for the best possible performance.

HideMyAss! can help you bypass censorship in countries where the government interferes with your freedom to access the entirety of the world wide web. But... it won't work in China all the time.

While we haven't been able to test it out, we've read that people are having mixed success when trying to get around the Great Firewall of China using HideMyAss! Some folks made it work and some others couldn't.

So you should get a different VPN if you need a reliable service for accessing services like Facebook and YouTube from the world's most populous country.

We haven't read similar reports for other countries, though.

Use a drop-down menu to compare HideMyAss with other VPNs.

You can subscribe to HideMyAss! by getting a monthly, yearly or bi-yearly subscription. Also, from time to time, they offer a 3-year subscription which -- obviously -- gets you the best possible deal. The math is always the same, the longer you commit - the better deal you'll get.

If you're unsure whether HideMyAss! will work for you, you can try it out for free for 7 days and even after that -- if it doesn't work for you -- take advantage of the 30-day money-back guarantee. Said guarantee leaves a lot to be desired, requiring users to explain themselves for asking their money back. Not the best practice, but hey - you do get that free trial, right?

HideMyAss! accepts major credit and debit cards and PayPal, as well as some alternative payment methods (though not cryptocurrencies).

HideMyAss! offers a 7-day free trial which is one of the most generous offers on the market. If you don't like the service, you should cancel it by the end of that first week -- otherwise, you will be charged a full year of service.

Also provided is a 30-day money-back guarantee, though it is a subject of fairly rigorous terms and conditions. For start, during the period you can't use more than 10GB of data or connect to HideMyAss! more than 100 times. Also, unlike "no questions asked" policies -- our favorite kind -- this one actually requires an explanation. Something's gotta give, I guess.

HideMyAss! has a large network of servers spread all across the world. It is also one of the fastest VPNs out there that provides buffer-free access to popular streaming services such as Netflix and BBC iPlayer.

The company offers an easy to grasp apps that are available on Windows, Mac, iOS, Android -- and there is also an option to set your router to sing along HideMyAss!

When it comes to privacy, HideMyAss! has your back. It wasn't always like that -- it used to collect some data -- but these days, it is truly a zero data-logging VPN, ensuring complete online anonymity.

Security is also top-notch -- relying on proven protocol and encryption, while offering a kill switch to "keep your ass hidden" even when a connection drops.