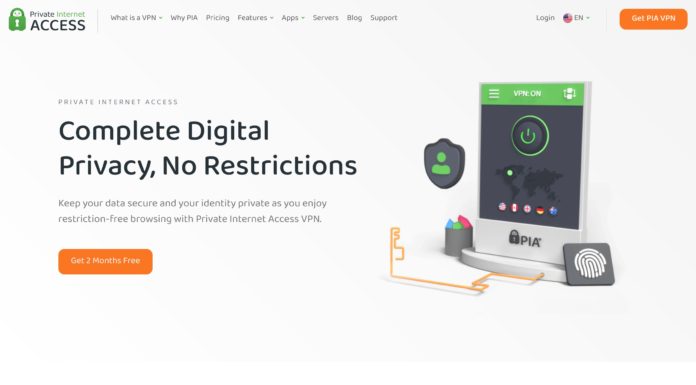 Private Internet Access (PIA) is one of the fastest VPNs out there, and the one that offers an array of security and privacy features. It also has a minimal logging policy and is great for streaming AND torrenting. Keep reading on what PIA is all about...

Private Internet Access operates more than 3,000 VPN and proxy servers in 60+ locations across 40+ countries. The company emphasizes it doesn't deal with virtual but bare-metal servers exclusively, which should reportedly make for "enhanced security and performance."

All of the most popular locations are covered, with more than a dozen cities in the U.S. delivering a fast experience for the majority of users. Other countries with servers in multiple locations include the United Kingdom, Canada, Australia and Germany. A single location is "covered" with at least 8 servers, with the majority having 20 or 30 servers.

Like most major VPNs, Private Internet Access has apps for popular desktop and mobile platforms -- including Windows, MacOS, Android, iOS and Linux -- and also allows users to set their routers for VPN-protected access to the world wide web. This is also how they are "covering" streaming devices, smart TVs and gaming consoles -- they don't get dedicated apps but will work just as well when connecting to the internet through a PIA-configured router.

Browser extensions, on the other hand, are available with PIA supporting Google Chrome, Mozilla Firefox and even Opera. You don't get the full protection though since these extensions work as proxies that will still hide your IP address and prevent WebRTC leaks. If you also run a desktop app on your computer, you'll get the full-blown protection with the PIA routing all the traffic in the background.

A single Private Internet Access license lets users run it on up to 10 devices simultaneously, which more than most other VPNs provide.

PIA is fast, really fast, especially if you live in the western hemisphere and are connecting to servers in that part of the world. Speeds go down if you are connecting to servers in other parts of the world, but they are still more than decent, allowing for buffer-free streaming experience, for instance. And the same goes for torrenting and gaming -- PIA is a service you can rely on to "do your thing" with little to no latency.

All in all, we have found that very few providers can compete with PIA in terms of performance, particularly on download speeds. During the time we've spent testing the service, we haven't experienced a single glitch when accessing Netflix and Hulu. Also, downloading files via BitTorrent was as fast as without a VPN turned on, which is truly amazing.

Private Internet Access offers high-end security features you would expect from a top provider. The service supports a few different protocols -- including OpenVPN, PPTP, IPSEC/L2TP and SOCKS5 (for proxies) -- that are paired with a couple of encryption options -- such as AES-256. Also included is a kill switch, and a malware blocker that acts like web firewall.

In addition, PIA delivers zero IP and DNS leaks, and -- for added security -- operates its own DNS servers.

Also worth adding is that PIA even links to popular DNS and IPv6 tests, allowing users to check out themselves how their VPN works. We gotta give them a point for this.

Private Internet Access has a strict zero-logs policy, which is fairly important considering it is a US-based business -- cause the government could ask them for access and with nothing logged, they wouldn't be able to accomplish much.

This is also helpful for other countries where the government could decide to snoop into its constituents' web whereabouts. Even if forced to provide access to the user data, the authorities would not be able to learn anything useful from provided (empty) logs.

PIA emphasizes that its VPN will also hide all of your online activity from your ISP. It encrypts your Internet traffic, provides server-grade firewalls and IP cloaking with every account so you can browse with complete Internet security.

Private Internet Access has a modern and easy to use apps. It wasn't always like that and we are glad to see the company evolving over time. It could still use some polish -- especially when compared with other top-tiered players -- but the apps are easy to understand and use.

However, despite looking fairly simple, the PIA app offers plenty of customization options for things like notifications, launch on start-up, and a kill switch with an "always" option. And that's just a start with the "advanced settings" screen offering even more options to play with.

As for PIA's mobile app, it too rocks a comparable (to the desktop app) number of features -- which is an exception rather than the rule among VPN providers.

Most users, however, won't be browsing around all those different options -- rather, they will just start the app, select the server and start enjoying the web like there's no VPN running in the background. And that's the whole point, we would add.

Private Internet Access offers live chat support 19 hours per day, 7 days per week -- and it will soon be upgraded to 24/7 availability!

PIA also has a comprehensive support section on its website, consisting of the vast knowledge base, installation and usage guides, and news about product updates. You may want to check it out even if you're just interested in VPNs and are not actively looking to buy one.

The entire Support section is easily searchable and you should be able to quickly find answers to any question you may have. If you can't find the answers, you can contact PIA and get an answer via email.

The most common question we get about any VPN is: "does it work with Netflix?" And we're glad to report that Private Internet Access works flawlessly with the popular streaming service.

The situation is similar with Hulu and Amazon Prime, but when it comes to BBC iPlayer - it's a bit complicated. Sometimes it works and sometimes it doesn't; therefore we can't recommend PIA to anyone looking for reliable access to British entertainment content.

But, we must add, that BBC is somewhat specific and is more rigorously scanning for (and blocking) VPN traffic than other services. Nevertheless, with PIA you can get around this restriction but it won't be super easy.

Another area where PIA shines is torrenting, with P2P traffic being supported on all servers in its network. As a result, you can expect some of the fastest download and upload speeds on the (VPN) market. This in turn also makes Private Internet Access a great option for streaming via Kodi (which delivers streams via BitTorrent).

In fact, we would say that Private Internet Access should be among the top choices for torrent users. It is reliable and fast -- which is just the way we like it.

There is a way to make Private Internet Access work in China, but you will have to manually tweak settings; therefore, you should get a different VPN if you live or work in China. The authorities there made sure many VPNs can't be used to bypass the infamous Great Firewall of China, and PIA is one of those "affected."

The situation is different in other high-censorship countries of the world -- such as Turkey, Iran and Saudi Arabia -- where you can easily "get away" with PIA.

Good to know... Every six months, Private Internet Access releases the Transparency Report to show the number of requests it received from governments to disclose information about the activity of its users. With this report, PIA users have additional information on the type of requests the company receives from governments and/or their agencies and how it handles these types of data requests. PIA says these requests come in three different forms: court orders, subpoenas and warrants. In all cases, PIA was unable to deliver any data to the authorities -- cause it stores none of it.

In addition to keeping your identity under the radar, PIA will also block all ads, trackers and malware before delivering the content to you. The product integrates the advanced firewall and filtering capabilities of the Netfilter Project, ensuring that users never receive any unwanted connections to their computer or smartphone. This server-grade filtering software delivers optimal performance and keeps all network intrusions out.

Another thing worth repeating is the fact that a single license lets you use PIA on up to 10 devices simultaneously. That's a hard-to-beat number, and -- considering all the devices we use -- something we personally appreciate.

Use a drop-down menu to compare Private Internet Access with other VPNs.

Private Internet Access accepts all major credit and debit cards, as well as other payment options, such as PayPal and Amazon Pay, and will also work with a few international payment services. Also, you can use your cryptocurrencies holdings to pay for the service -- including Bitcoin, Bitcoin Cash, Ethereum, Litecoin, and Zcash. The last mentioned enables 100% anonymous payments.

As that's the case with other services, the longer the period of subscription you select, the less you will pay -- with the 2-year subscription getting you the best value for money.

The money-back guarantee is available.

Private Internet Access doesn't provide a free trial, but it does offer a money-back guarantee that is good for 30 days. This is one of those no-questions-asked guarantees -- which happens to be the kind of guarantees we like the most. Once you request your money back, it will be returned to your account within seven working days.

It also happens to be one of the more affordable options on the market, and considering all the features you get as part of the deal -- PIA offers quite a bang for the buck.

Its zero-logs policy is something many folks will appreciate, and the same goes for PIA's browser extensions -- which are available for Chrome and Firefox.

Free trial is not available but there is a money-back guarantee that is good for 30 days.