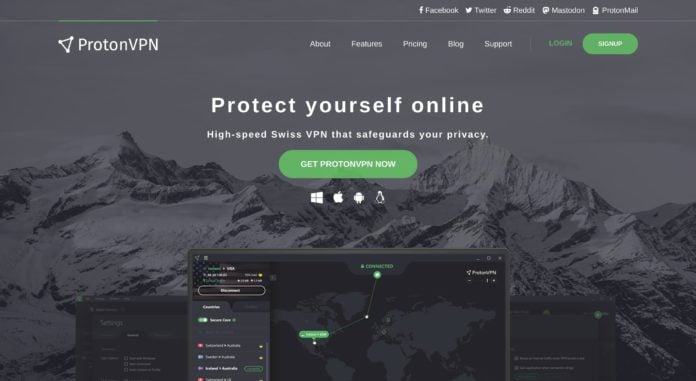 ProtonVPN promises to deliver a lot, but does it manage to do that? In this review, we're putting its service to the test. Read on for all the details...

Last time we've checked ProtonVPN, its network included more than 1000 servers across 50+ countries. As that's usually the case, most servers are located in Western Europe and North America, with little to no choice in more exotic places.

This isn't necessarily a problem as the vast majority of VPN users actually connect to the US and Europe-based servers to access content that is otherwise unavailable in the country they live in. So, if you're on the lookout for a VPN service for accessing video streaming services, ProtonVPN could be a viable option. But I'm getting ahead of myself...

ProtonVPN has dedicated apps for all popular platforms -- including Windows, MacOS, Android and iOS -- and can also work with Linux systems. Setting it up to work with Linux does require some manual setup, and the same goes for making it work with your router -- you will have to tweak things to do that. Once you're done though, you will be able to connect other devices around the house -- such as gaming consoles and streaming boxes -- to a secure network.

Browser extensions are not included, but as long as you run ProtonVPN's desktop app - you're good to go.

A single ProtonVPN Basic plan license lets you run it on up to 2 devices, whereas that number goes up to 5 or 10 with more expensive Plus and Visionary plans, respectively. In this review we focus on the Plus plan which, we think, makes the most sense.

Given the size of its network, we would expect to experience some lag while using ProtonVPN. We're glad to report that's not the case, though we didn't get the speeds of top VPN providers -- after all, they have more "horsepower" (as in - more servers around the world) to deliver better performance.

Nonetheless, ProtonVPN could be your reliable partner for streaming movies and TV shows, and for download files via BitTorrent. Like that's not enough, the low latency of the service also makes it a viable option for gamers.

ProtonVPN uses the proven OpenVPN protocol on desktop apps and IKEv2 on mobile apps. Encryption is via AES-256, which is considered unbreakable and thus, relied on by the government agencies around the world to secure their communications.

The service also includes the kill switch functionality to prevent the IP address leakage, as well as protection against DNS and IPv6 leaks.

For those looking for an additional security layer, there's the Secure Core VPN mode which forces internet traffic through multiple servers before it leaves the network.

ProtonVPN operates its own network of servers in countries with strong privacy laws, making sure your identity will never be revealed.

ProtonVPN collects minimal amount of information none of which could lead to any individual user. The only data the service keeps is a single timestamp of your most recent successful login in order to determine that nobody else is using your account. Also, this is overwritten every time you use the service, thus it can't be traced back to you in any way.

ProtonVPN is based in Switzerland, which means its users benefit from some of the world's strongest privacy laws.

ProtonVPN's desktop apps are super easy to use with just a few clicks getting you connected to the secure server.

From the main screen, you get to see some useful information such as stats about server load, upload and download speeds, and your new IP address.

Selecting a server gets you going through an alphabetically-sorted list of locations. Specialty servers, like those compatible/optimized for Tor or torrenting (P2P), are clearly labeled -- making it a hassle free experience to get to the right server for your needs du jour.

Advanced settings are not abundant, but you get to easily turn on/off the VPN kill switch and DNS leak protection.

ProtonVPN's mobile apps on the other hand lack some features, but are equally easy to use.

ProtonVPN's customer support leaves a lot to be desired. Its online resources offer FAQs on various general topics, with a search feature letting you get to the right answer quickly. Also included are detailed set-up guides for devices that need to be manually configured and some basic troubleshooting advice.

ProtonVPN can help you get your Netflix or Hulu fix, but don't expect it to go far from there. We had problems making it work with Amazon Prime and BBC iPlayer, so if you're looking for some more encompassing solution for your video streaming needs -- you're better off getting some other service.

For most users though -- as in those looking to access Netflix from all around the world -- ProtonVPN will get the job done, delivering the buffer-free experience round the clock.

ProtonVPN is a good choice for torrenters and, consequently, those looking to enjoy streaming via Kodi. Clearly marked P2P servers make it a snap to connect to the "right place" from where you can expect fast download and upload speeds via BitTorrent.

The problem, however, is that ProtonVPN offers its service through multiple tiers with only Plus and Visionary subscriptions getting you the (torrenting) goods. With the ProtonVPN basic plan, you'll see torrenting being restricted to just a few servers.

Simply put, you can't rely on ProtonVPN to connect out of China where the government is in ongoing pursuit against VPN services. It should work in other high censorship countries (we weren't able to test it ourselves, though), but honestly -- we don't expect it to rock our world.

The problem is in ProtonVPN's limited network that will require users in, say Saudi Arabia, to make long distance connections to servers in other parts of the world. Some latency is expected though how much - it's hard to tell (without testing). We'd have to guess that you can still access Netflix, since video streaming isn't that demanding -- especially if you are not looking to access 4K streams.

In any case, there are better services out there for bypassing censorship and we advise you to check them out.

ProtonVPN comes with Tor support built-in, letting users route all of their traffic through the Tor anonymity network to eventually access the dark web websites. This, the company claims, provides a "convenient way to access Onion sites with just a single click."

In addition, and as mentioned above, there's the Secure Core VPN mode which forces internet traffic through multiple servers before it leaves the network.

Finally, let's not forget the free plan ProtonVPN is offering, which is a nice touch that lets you try out the service before committing a single dime of your hard-earned money.

Use a drop-down menu to compare ProtonVPN with other VPNs.

ProtonVPN offers a few different plans, starting with a free plan that lets you test out the service before committing to any paid plan. Speaking of which, you can choose between Basic, Plus and Visionary plans; we find the last to be too expensive for what it offers, thus in this review - we are focused on the Plus plan.

You can pay for the ProtonVPN service with PayPal; and there is a 30-day, no-questions-asked money-back guarantee.

ProtonVPN offers a 30-day, no-questions-asked money-back guarantee, which -- as you could imagine -- is our favorite kind of guarantee.

Perhaps more important is the ability to try out ProtonVPN without any upfront payment. For that, you can sign-up for a free plan that comes with some limitations, but should give you a general idea of what ProtonVPN is all about. We love that.

ProtonVPN offers a decent service with a solid network of servers that mostly span North America and Western Europe. For the majority of users, this is more than enough, allowing them to anonymously surf the web, access Netflix and download files via BitTorrent.

Advanced users on their end will appreciate features such as the ability to easily select Tor-compatible servers and the Secure Core VPN mode which forces internet traffic through multiple servers before it leaves the network.

ProtonVPN is available in multiple tiers -- you can start with a free plan and eventually upgrade to the one that best suits your needs. The company has a 30-day no-questions-asked money-back guarantee so even if you don't like ProtonVPN, you can cancel it and get your money back. Worth checking out if you need a VPN to get around your company's/school's restrictions; otherwise, you're better off getting some better service.