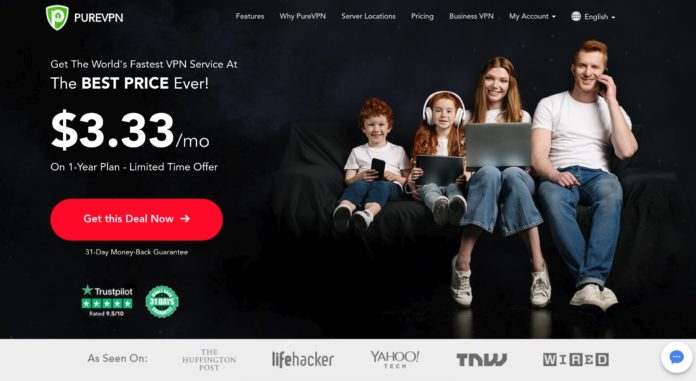 PureVPN runs one of the biggest networks out there with servers in 140 countries. But is it the fastest VPN? And does it work for all users? Read on to find out...

PureVPN is one of the biggest VPN service providers, operating over 2,000 servers across more than 140 countries and 180+ locations. Yes, this means it has servers on every continent, making sure all kinds of users will find it useful. The U.S. alone is covered with about a dozen locations and multiple cities are also available in other major markets such as Australia, Canada, the UK and so on.

Like that's not enough, PureVPN also has 300,000+ IP addresses, which should reduce the risk of any server congestions.

PureVPN has custom apps for Windows, MacOS, Android, iOS, and Linux, as well as for Amazon Fire TV Stick and Android TV. You can also configure your router to sing along PureVPN after which all devices in your home/office will benefit from the secure connection. Sounds like a hassle? No problem - you can buy a router with PureVPN preconfigured and you're good to go.

Browser extensions are also available for Google Chrome and Mozilla Firefox, though it is important to note that these are actually proxies that don't crypt your connection so you should still run the full-blown desktop app in the background. Nonetheless, these extensions come with WebRTC leak protection.

A single PureVPN license lets you connect up to 5 devices to the network.

PureVPN is fast but not the fastest. It does, however, manage to deliver consistent speeds across its network, making it a solid option for streaming and torrenting.

Local speeds are fast, but connecting to a server on the other end of the planet leaves a lot to be desired. Don't get me wrong, you can still access the popular streaming services and do your torrenting -- just don't expect to seamlessly move large files in such a setup.

PureVPN automatically selects what it deems is the "best" protocol on startup. While we've no doubt this will get the job done for the majority of users, we still like to manually select the OpenVPN protocol, which has proven itself over time. Speaking of "proven" things, the service relies on the AES-256 encryption that is used by governments across the world to secure their communications.

Among other features that will keep you protected while using PureVPN, there's the VPN kill switch that kicks in if the VPN connection drops for any reason; as well as DNS, IPv6 and WebRTC leak protection.

Another cool feature that comes included is split tunneling, which lets you direct only specific traffic through the VPN while the rest will go outside of the encrypted tunnel.

PureVPN collects a minimal amount of data, including the day you connect to a specific VPN server location, your internet service provider name, and the total bandwidth used by each user. This information alone could hardly be used to identify any individual user, so yes - you can rest assured knowing that your internet whereabouts with PureVPN won't be made available to third parties.

But, it's worth knowing that situation wasn't always like this. Few years ago, PureVPN was collecting IP addresses of its users without letting them know. The good thing was that a criminal was arrested thanks to this information, but we don't like the fact that an IP address was collected without telling its users about it. So some users are still sceptical that PureVPN has really revamped its policies from the ground up. My guess is that they had to in order to stay relevant.

For what it matters -- and it's actually a big deal -- PureVPN is based in Hong Kong which reportedly doesn't have mandatory data retention laws. And if it does get a subpoena from the authorities, the company says it won't be of much help since there is "almost nothing of value to share."

PureVPN's apps look kinda dated but they get the job done. What we like is the way you can select the goal of your connection -- such as streaming, file sharing, dedicated IP, and so on -- and let PureVPN do the work for you by selecting the best server for that specific need.

There are many options to play with in the settings menu, with some advanced options including neat explanations to help you move around the app.

When it comes to mobile apps, they look better while still offering a host of advanced features.

Yes, PureVPN offers a live chat, letting you get your answer from another human being round the clock. You'll get prompt answers but advanced users may be frustrated to get their tech inquiries solved -- it's a rather basic support on the other end of the line. So for advanced requests, you are better off using email support or wait a bit for your inquiry to be forwarded to the tech department.

Some other users may get their answers through the Support Center which is neatly organized and bursting with FAQs, troubleshooting advice and manual setup guides for all kinds of devices.

PureVPN is one of the best services for unlocking video streaming websites. The dedicated PureVPN Stream Mode unlocks more than 20 services and channels -- including (most importantly) Netflix, BBC iPlayer, Sky TV, Hulu, ABC, ESPN, and many others.

In our tests, Netflix worked every single time, but the situation wasn't always great with BBC iPlayer. A few times it worked like a charm, and some other times - it refused to play.

Torrenting is allowed on many servers in PureVPN's network, but not all. Due to legal reasons, it is not permitted on servers in the US, UK, Canada and Australia.

Also, and as already noted, there is a dedicated Kodi add-on that makes streaming via BitTorrent a much more seamless experience.

PureVPN can work in China but only with the Windows app and optimized servers within the Dedicated IP mode. Some additional manual tweaks may be needed -- like selecting the IKEv2 VPN protocol -- in order to bypass the Great Firewall of China. Something's gotta give, I guess... Or not, considering that there are other VPNs that work out of the box in the world's most populous country.

The situation is different in other high-censorship countries where you should expect a more seamless experience to access the entirety of the world wide web.

PureVPN not only keeps you protected while accessing the internet, but also makes for an ad-free experience with a special feature removing ads and freeing up the screen space on the fly.

In addition, PureVPN is one of just a few VPN service providers that offers dedicated apps for Smart TVs so that its users can have "all the internet freedom on their TVs." A nice touch.

Use a drop-down menu to compare PureVPN with other VPNs.

PureVPN accepts all major credit and debit cards, PayPal, Alipay and some other international methods of payment, as well as cryptocurrencies. In other words, if you want to pay - they'll make sure they can "handle" your money.

There is a neat, three-day trial offer with no restrictions for $2.50, which lets everyone try out the service before buying in. And once they decide to commit, there's a 31-day money-back guarantee.

PureVPN offers a three-day trial of its service for $2.50, which is neat option that lets users try before buying into PureVPN.

For those deciding to commit to some plan, there is a 31-days no-questions-asked money-back guarantee. If you are quitting due to technical issues, an attempt will be made to resolve your problems and only then the procedure will start to get you your hard earned cash back. It can take up to 30 days for the refund payment to appear in your account.

PureVPN runs one of the biggest networks out there with servers in 140 countries. This helps it consistently deliver reliable, though not the fastest, download and upload speeds -- making it a great option for torrenting and streaming, alike.

Speaking of streaming, there is a dedicated PureVPN Stream Mode which unlocks more than 20 services and channels -- including Netflix, BBC iPlayer, Sky TV, Hulu, ABC, ESPN, and many others. Due to legal reasons, torrenting is not available on all servers, namely those in the US, UK, Canada and Australia.

PureVPN can work in China, but some manual configuration is required in order to do that. It's much easier in other high-censorship countries.

In order to get more users to try its service, PureVPN offers a three-day trial account with no restrictions for $2.50, and is supporting just about every payment method. Also, there is a 31-day money-back guarantee.