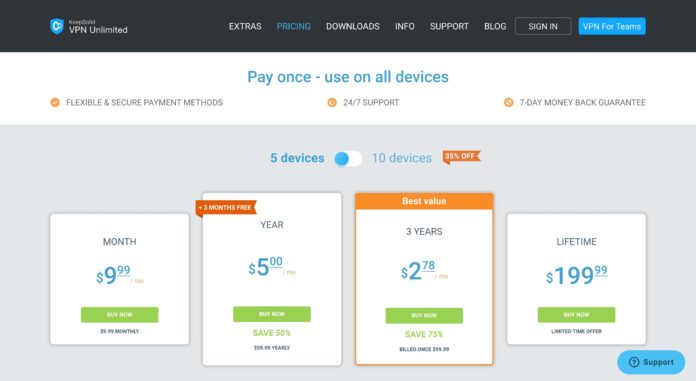 VPN Unlimited is a rather affordable, beginner-friendly VPN offering a decent bang for the buck. Its performance may not be stellar but you will get to enjoy video streaming services, while keeping your identity under the hood. Here are the details...

KeepSolid VPN Unlimited has a network that includes more than 400 servers spread across 70 locations all over the world. These locations are what we would consider "usual suspects" with most servers residing in North America and Europe. The U.S. alone is covered with a network of servers in about a dozen cities, which is what most users care about -- so they could, say, enjoy Netflix.

But, should you need to connect to some more exotic place, you will have to go for a different VPN provider. For most users though, VPN Unlimited will "get the job done."

VPN Unlimited has dedicated apps for all popular platforms -- including Windows, Mac OS, Linux, iOS and Android; and could also work with a router to protect your entire network. What's more, the company has partnered with FlashRouters to allow users to buy pre-configured routers, which is a nice touch.

Additionally, there are proxy extensions for Google Chrome and Mozilla Firefox browsers that are easy to use, but -- without the full desktop app running in the background -- they don't provide the same level of protection. They do feature a WebRTC Leak Blocker to keep your IP hidden while you browse the web.

For game consoles, streaming and other devices that don't have their native app - VPN Unlimited provides manual setup guides so they too could benefit from enhanced security and privacy.

A single VPN Unlimited license lets users run it on up to 5 devices, and you can also sign-up for the 10-device version.

VPN Unlimited is not the fastest kid on the block, and it's not trying to be. Simply put, its network isn't as vast as some of its competitor's. Therefor, it is more affordable than top tier providers.

Nonetheless, you can expect decent download and upload speeds, which means buffer-free streaming. The situation is not like that for gamers who should look elsewhere -- VPN Unlimited won't get them the "goods" they're expecting. This is because the latency is very sluggish delivering far from perfect experience for any real-time gaming.

For everything else, you get what you've paid for and then some -- especially if you're connecting to nearby servers.

VPN Unlimited uses the OpenVPN protocol on Android and Windows platforms, and IKEv2 on macOS and iOS. OpenVPN supports AES 256-bit encryption, while IKEv2 connections use AES up to 256-bit, Camellia 256-bit, and ChaCha20Poly1305 encryption methods.

An additional layer of encryption and data obfuscation is provided for restricted environments with KeepSolid Wise. This is a VPN Unlimited's own protocol extension that uses AES-256 and provides what the company calls the "extended online freedom," allowing to get free access to "all legal web content."

The kill switch function is included to block online traffic should the VPN connection drops for any reason. There is also a DNS leak protection, though we should add that the company doesn't own DNS servers. Not a biggie but important to note, nevertheless.

Also collected is the total amount of data used for each session, session dates, and the number of devices using KeepSolid products.

If you're using web for mostly legal stuff, plus some torrenting, there is nothing to worry about. But... we can't help but whine about all the data VPN Unlimited is collecting. So if you're really into protecting your privacy, you may want to go for some other service, instead.

VPN Unlimited's apps look very modern and are easy to use. You get to see where the chosen server is on a map along with connection status on the main screen. Speaking of servers, you can either browse the server list or search for it by location.

Also included is the button to display your new IP address, should you need it.

Advanced options are also there and are opened by clicking/tapping on the "burger menu" from where tech-savvy folks can tweak things left and right.

Finally, mobile apps share the look and feel of desktop apps, and are generally easy to grasp.

For VPN Unlimited support, you can either use an online form or send them an email, and you'll get an answer within an hour or less. That's all nice, but we would appreciate live chat support much more.

There are useful guides and the vast (and searchable) FAQ section, but nothing beats the presence of another human being on the other end of the line. Not sure why VPN Unlimited haven't included this capability... Sure, the service is easy to use, but one could always stumble along the way.

VPN Unlimited is a great service for streaming especially for Netflix which is "covered" with dedicated servers. As a user, all you have to do is select the "Streaming Netflix" server to benefit from the buffer-free experience.

BBC iPlayer works with VPN Unlimited just as well -- it too has a dedicated streaming server. And the same should go for other popular services (we haven't tried them out ourselves) such as Hulu, Sky and so on.

VPN Unlimited allows P2P traffic on its servers, but... it's a big "but" -- only on a few servers. Last time we've checked, just 5 servers were good for torrenting. So you should look for a different VPN service if you want to download stuff using BitTorrent or watch Kodi streams. Simply put, VPN Unlimited is not up for the task.

China keeps cracking down on VPN providers and from time to time a service that used to work will stop doing so. For one reason or another, VPN Unlimited has managed to stay intact and is reportedly still working from the world's most populous country.

With the company's KeepSolid Wise protocol, the VPN traffic appear as standard HTTPS web traffic making it difficult to detect and block -- therefore allowing users to beat the government censors.

And you know what they say about VPNs -- if it works in China, it works everywhere -- which is true for VPN Unlimited. You shouldn't have any problems accessing internet in other places with questionable policies, such as UAE, Turkey and Iran.

From time to time, some tech-savvy users will require a static IP address, and we're happy to report that VPN Unlimited supports that capability.

Also, the company has a version of its product for "Teams & Family," offering "all technologies of VPN Unlimited service" along with "personal domain for account management and 24/7 support." So, in this case, round the clock support IS available.

Use a drop-down menu to compare VPN Unlimited with other VPNs.

VPN Unlimited accepts all major credit and debit cards, as well as PayPal and Bitcoin. You get to choose between a few different options, and as usual, the longer you commit - the less you'll end up paying on a monthly basis. The best deal comes with the Lifetime subscription, which we suggest taking only when you decide that VPN Unlimited works best for you. Also, there is the option with support for 10 devices, which is obviously slightly more expensive.

VPN Unlimited offers both a free trial and a money-back guarantee, each limited to 7 days.

Both free trial and money-back guarantee are available with VPN Unlimited, and each of the two options is limited to 7 days. So you have a week to try out the service and once you're charged for the first time, you get another week to cancel your subscription.

While we love the free trial option, we can't help but wonder why VPN Unlimited hasn't opted for a longer period for its money-back guarantee -- 30 days is what most major VPN providers are offering.

For what it matters, VPN Unlimited will not automatically charge your credit card after the trial week is over. Also, if you decide to ask for your money back, the company promises not to bother you with questions like why are you dumping their service. We love that as well.

VPN Unlimited is an affordable option that includes a decent level of security and performance. It is not without flaws, but you still get a decent bang for the buck. Also, VPN Unlimited is one of just a few services that offers a lifetime subscription, which we suggest taking only after testing the service thoroughly.

Speaking of tests, if you're a gamer or heavy torrent user -- you'll want to look elsewhere. The situation is very different if you mainly need a VPN for accessing streaming services like Netflix and BBC iPlayer -- which work flawlessly every single time.

VPN Unlimited works in China though you get a limited number of servers to choose from. Nevertheless, that's better than some other VPN services -- you will still be able to visit the popular social media sites and YouTube.