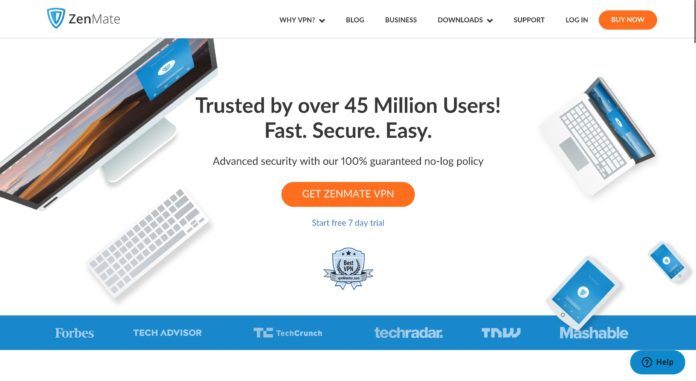 ZenMate is far from being the biggest VPN, but it could be a good option for some users. In this article, we put ZenMate's service to test; here's what's it all about...

ZenMate operates a small network of servers in 30 countries, each of which is covered with a single location. One exception is the U.S. where you can choose between the East and West coasts.

There are three locations in the entire Asia Pacific region; whereas Africa, Australia, and South America are each covered with a single server.

ZenMate has 3,000 individual IP addresses, which is not enough and could lead to network congestion.

ZenMate has native apps for most popular platforms -- namely Windows, MacOS, Android and iOS. Additionally, there are manual setup guides for Linux and other devices, including routers, Amazon Fire TV and a few games consoles. It's worth adding that these guides leave a lot to be desired and chances are newbies will struggle to configure devices not supported with native apps.

Browser extensions are available for Google Chrome, Mozilla Firefox and Opera and they rock. In fact, they look much better than ZenMate's desktop and mobile apps that feel rather basic in comparison.

A single ZenMate license lets you protect up to 5 devices.

ZenMate offers below-average and inconsistent speeds across its server network. In our tests, we have also found latency to be very high, making ZenMate a hard sell for gamers.

On the other hand, those looking to access video streaming services will find ZenMate's service to be more than good enough. It will deliver buffer-free videos pretty much every single time -- except if you want to stream in 4K when you may experience a few hiccups.

Also, the service could be used for general web browsing.

ZenMate comes with two pre-installed protocols -- IKEv2 and L2TP -- whereas connecting through OpenVPN requires manual configuration, and even then it is limited to just two servers (UK and US). Encryption is via AES-256, which is a top cipher that is considered "unhackable."

ZenMate has a VPN kill switch feature that makes sure your true IP address doesn't get leaked by blocking all web traffic if the VPN gets disconnected. Also included is a DNS leak protection which prevents DNS requests being sent to your ISP.

In addition and as noted above, ZenMate's browser extensions include malware blocking and tracking protection features.

ZenMate says it doesn't collect, process or permanently store users' personal data. The only information ZenMate collects is the amount of data you use, and this is only on accounts with limited data volumes. Also, it may temporarily store your IP address to "prevent against attacks."

But, as a Germany-based company, ZenMate is a subject to EU data retention laws, meaning the little data it collects may be given to authorities if they submit a subpoena. The good thing is that this data can hardly lead to any individual user being identified.

ZenMate's apps are as straightforward as possible with a limited number of configurable options. Among those are kill switch and DNS leak protection, and... that's about it.

Most users will find that sufficient, but we would like to see more. For one thing, we miss a few details about the current connection such as the VPN protocol and a new IP address.

On the other hand, ZenMate's browser extensions offer a better experience but they are not the complete substitute for a full-blown desktop app.

There are well-organized FAQs on the site and you can send an email to get answers to any questions you may have. Also included is the so called Academy section that covers interesting and related topics like WiFi safety and Net Neutrality. We would like to see more images and even videos all across the board to make those explanations easier to grasp.

Netflix works with ZenMate, with a dedicated US streaming server making sure you get a buffer-free experience. The same is true for Hulu and a few other US-based services.

On the other hand, the situation is different with BBC iPlayer which didn't work every time we tried it. We did manage to start it up with ZenMate's browser extension, though. So I guess it works, it's just a matter of technique.

Kodi, on its end, works nice on Windows and Mac computers.

P2P traffic is supported on every server, making ZenMate a viable option for torrenters and -- related to that -- Kodi users. You won't get top speeds that major VPN providers are offering, but you will be able to grab all the files you want -- if you give it some time.

ZenMate openly says it may not work in China. In fact, the company suggests its (prospective) clients to first download the software without purchasing a premium account to try it out. We can't help but like this honesty.

ZenMate used to be a viable option, but the situation is different these days following the country's VPN crackdown in 2018.

And the same goes for Iran and Saudi Arabia, with ZenMate saying it is investigating ways to get around censorship issues, without promising an immediate solution.

You shouldn't have such problems in other high-censorship countries though -- including Turkey, Pakistan and the UAE. ZenMate has a list of ISPs in these countries that are known or suspected to be blocked, which is a nice touch. Again, we love how they're handling this issue.

ZenMate offers a few extra features, including the "Web Firewall" that will block ads, trackers and malware.

Another feature, ZenMate SafeSearch, will take care of bias news and fake information to ensure you surf safely.

Finally, the handy ZenMate Identity Shield will inform you whenever your email appears in a breached database.

Use a drop-down menu to compare ZenMate with other VPNs.

ZenMate accepts major credit and debit cards, PayPal and UnionPay. In addition, you can also pay via an international bank transfer. Cryptocurrencies are not supported. Money-back guarantee is good for 30 days, and there is also a free trial option which lasts for 7 days.

ZenMate has both the money-back guarantee and free trial. The former is good for 30 days and is of our favorite "no questions asked" kind with no hidden data caps or restrictions.

The free trial is good for 7 days, providing unlimited use of the service during the period. What's more, you won't be automatically billed after a week which is a nice touch of trust. Love it.

ZenMate offers a decent service but it is definitely not in the top bracket. We do like their honest approach that doesn't include promises VPN will work everywhere -- cause it won't, especially in certain high-censorship countries.

ZenMate is good, but not the best, for regular web surfing, torrenting and accessing streaming services like Netflix. The company offers apps for all popular platforms and has one of the best browser extensions we've seen.

Also included are a few extra features such as an ad blocker, SafeSearch that filters out fake news and Identity Shield which informs you whenever your email appears in a breached database.

ZenMate offers a 7-day free trial of its service and 30-day money-back guarantee.