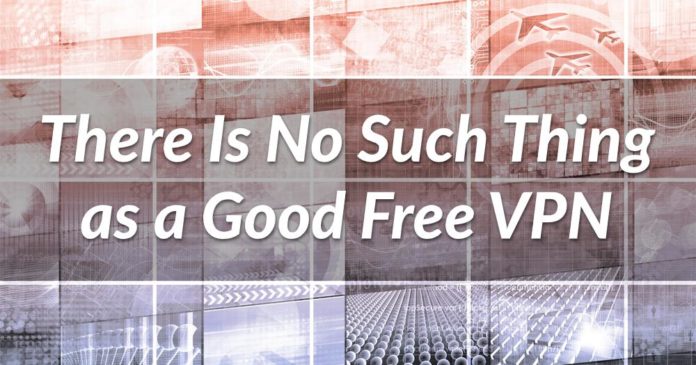 With the growth of the Internet, we got used to getting many things for free. But many of those things are not really free, with companies serving us ads in exchange for providing the service for free. But we know that operating any web service is everything but free. They have to pay for hardware, software, licenses and people.

The situation is even worse with free VPNs as we are talking about a piece of software that sits between you and the rest of the Internet. This unique position provides a VPN operator with all the information you are looking for online. They know what you search, watch, read, listen to and more. And that’s just one of the pieces in the “free VPN” puzzle.

In this article, we want to give you 5 reasons why you should avoid free VPNs. Here they are…

Security isn’t free; it costs real money — meaning that the company providing the free VPN service couldn’t afford the top-notch experts. And the same goes for the best hardware and software that is required to run a solid VPN — if the service is free, it can hardly afford to invest in “all that jazz.”

As a result of this, free VPNs tend to include bugs with some of them even come with serious security flaws.

And the same goes for privacy. We have seen VPNs admitting to storing your personal information along with all other details they could get their hands on in exchange for providing you with the free service. Is this something you really want? I don’t think so.

In contrast, paid (premium) VPN services tend to come with zero-logs policies and top-notch security technology. So yes, they’re worth the money.

Related to the previous section — some free VPNs come with malware pre-installed, enabling the software owners to make money out of your computer or smartphone. How they do it? Well, they can use your device’s computing power to mine for cryptocurrency, or worse yet, collect all your data and sell it to shady advertisers and agencies.

In fact, a CSIRO study (The Commonwealth Scientific and Industrial Research Organisation) from a few years ago has found that while 37% of the analyzed Android VPN apps have more than 500K installs — over 38% of them contain some malware.

That’s a staggering figure and we have to ask — is it really worth experimenting with free VPN apps?

The full CSIRO report, entitled “An Analysis of the Privacy and Security Risks of Android VPN Permission-enabled Apps,” can be downloaded from here (PDF).

Furthermore, it is worth adding that mobile ransomware attacks have been skyrocketing in recent years, and with VPN apps having all the permission a hacker would desire — they could be used as a tool against their users themselves.

While most of us accept such arrangements with news sites and services like YouTube, there is no good reason to do the same with a VPN. After all, it is the piece of software that sits between you and the web site or web service you’re visiting and could serve all the ads it wants. As a result, with a free VPN — you can get a very different internet experience with sneaky ad-serving trackers following you across the web.

The “best case” scenario is just to see some ads in the VPN app itself, but your data could also be offered for sale to third-party advertisers.

In contrast, several premium VPNs let you remove ads as you browse the web. We do not necessarily argue for this — cause content publishers need to make their money too — but it’s a nice tool to have, nonetheless.

One of the most popular uses cases for VPNs is accessing video streaming services like Netflix, Hulu, Disney+, Prime Video and so on — from all across the planet. The goal of the user is to watch some movies and TV shows that would otherwise (without a VPN) be outside of his/her reach.

In order to ensure a solid experience, a VPN should have an expensive infrastructure which — as noted above — costs real money.

Because of the lack of finances to build and maintain this (expensive) infrastructure, free VPNs seldom (if ever) deliver the buffer-free experience.

Moreover, because of the way content rights are bought and sold on the international market, streaming services are routinely blocking large numbers of IP addresses. Free VPNs can’t afford to buy new IP addresses because, again, they don’t have the money.

On the other hand, paid VPN operators know you’re using their service as long as it works, so they are buying new IP addresses all the time.

5. Your time is NOT free

When the saying “you get what you pay for” was invented, there was no free software let alone free VPNs. Today, we know that even if something is free, it could end up costing us real money, and worse yet — our privacy.

With a free VPN, you are getting a service that can’t be relied on. It may or may not work, and your data — as far as we (don’t) know — could be up for grabs. You may use it to watch a single movie one day only to realize it doesn’t work the next one. The network congestion is something a free VPN could do little about — except turn to the premium model and actually start selling its service. This, BTW, is what we evangelize. Cause some things cannot be free.

Before I let you go, I need to add that a free trial option is different. It is there to entice users to try some service out and later on actually pay for its usage. As such, the free trial is part of the company’s marketing strategy and we have nothing against it — quite the contrary. And the same goes for money-back guarantees, which tend to work just as well.

Remember that your time is finite and you don’t want to waste it by trying an unreliable service only to realize it has been working against you all the time. Check out our Best of the Best VPNs section and find the right VPN for yourself. It’s actually easier than you think. 😉