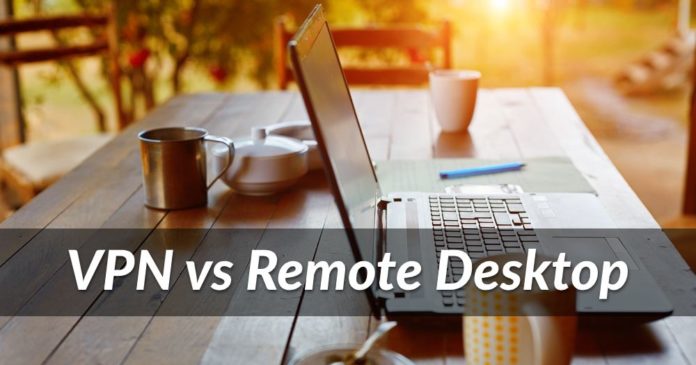 You may have heard some folks saying they don’t need a VPN since they have remote desktop access to their company’s server. Nothing wrong with that as that too could help them achieve their business objective. Also, the remote desktop access lets them do much more on that particular server as it could be configured to offer administrative privileges.

A VPN is a different “beast” and in a way the two technologies aren’t competing… But I’m getting ahead of myself. Let’s first see what Remote Desktop is all about and then compare it to VPN, shall we?

What is the Remote Desktop?

Remote Desktop, or Remote Desktop Protocol (RDP), is a proprietary protocol developed by Microsoft that provides the user with a graphical interface to connect to another computer over a network connection. The protocol is an extension of the ITU-T T.128 application sharing protocol.

In order to connect to a Remote Desktop, the user employs the RDP client while the other computer must run RDP server software.

Every version of Microsoft Windows from Windows XP onward includes an RDP client software — Remote Desktop Connection (RDC) — whose version is determined by that of the operating system or by the last applied Windows Service Pack.

Beyond Microsoft, there are numerous implementations of RDP clients and servers that implement subsets of the Microsoft functionality. For instance, the open-source command-line client rdesktop is available for Linux/Unix and Microsoft Windows operating systems. There are many GUI clients, like tsclient and KRDC, that are built on top of rdesktop; CoRD is such a client for the Macintosh.

In 2009, rdesktop was forked as FreeRDP, a new project aiming at modularizing the code, addressing various issues, and implementing new features. Around 2011, the project decided to abandon forking and instead rewrite under Apache License, adding more features like RemoteFX, RemoteApp, and NTLMv2. A commercial distribution called Thincast was started in 2019. There’s also a GTK-Application named Remmina.

Open-source RDP servers on Unix include FreeRDP and xrdp. The Windows Remote Desktop Connection client can be used to connect to such servers.

Proprietary RDP client solutions such as rdpclient are available as a stand-alone application or embedded with client hardware. A new access paradigm, browser-based access, has enabled users to access Windows desktops and applications on any RDP hosts, such as Microsoft Remote Desktop (RDS) Session Hosts (Terminal Services) and virtual desktops, as well as remote physical PCs.

There is also a VirtualBox Remote Display Protocol (VRDP) used in the VirtualBox virtual machine implementation by Oracle.

RDP clients are also available for mobile platforms such as iOS and Android.

What is a VPN?

A VPN is very different from the RDP. Instead of connecting to a Remote Desktop-enabled server, a VPN app/client connects to a VPN server. However, by default that won’t give you rights to play around the server; instead, in most cases, you will just get a local IP address that will let you do things in the local (server) network.

In other words, a VPN act like a tunnel for your communications that allows you to change your IP address so that you can remain secure and anonymous online. In a business setting however, you get to use a VPN to access the corporate resources that would otherwise be outside of your reach when you’re not in the (physical) office.

By default, a VPN is also more secure though RDP could be set in a way to provide a high level of security, as well.

There are a few things we should consider here:

First, generally speaking, the use cases for RDP and VPN are very different. Whereas RDP is primarily a business tool used to connect to a COMPUTER, a VPN is used to connect to a different NETWORK. By doing this — connecting to a network — a VPN unlocks new doors for users, for instance allowing them to access (geo)restricted content.

Second, a VPN is more secure with most of today’s top services offering end-to-end unbreakable encryption for all your Internet traffic — the same kind of encryption that is used by the likes of NSA and CIA. In contrast, RDP could be set with a high-level of encryption but that secure channel will work only between your device and the server/computer you’re connecting to.

Third, the RDP is slower. Typically, you are connecting to a single computer which as far as you know may also be accessed by other people. This could throttle the connection speeds, making it slow for comfortable work. A VPN, in contrast, will just channel all the traffic, offering (in case of best VPN services) powerful servers to do so.

There are also other differences, but the main point is that most users need a VPN rather than RDP. Aside from “taking care” of their business needs by providing them with a secure communication channel and a dedicated IP address (if it’s needed), a good VPN will also let users entertain themselves even when visiting far off places — i.e. letting them keep their access to services like Netflix — while protecting their privacy along the way. And let’s not forget the fact that a VPN serves as an indispensable tool for protecting your communication when connecting to public Wi-Fi hotspots.

As usual, we advise our readers to start by checking our list of Best VPNs as all of them have “what it takes” to keep them protected and productive while on the go. Good luck! 😉