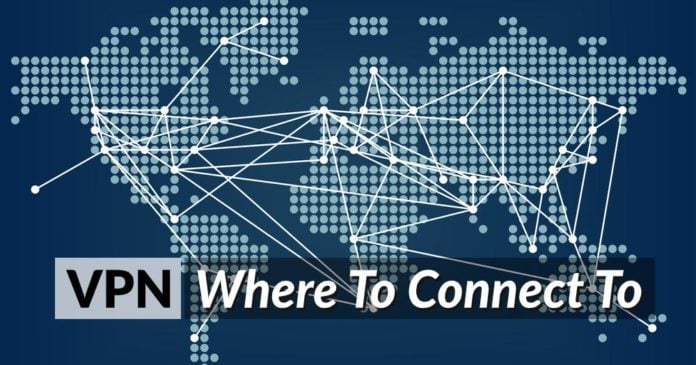 Many VPNs pride themselves with the size of their server networks. While it is cool that some VPNs have a ton of servers to choose from, it also makes it slightly harder for users to choose the best server.

So where should you connect to? There is no simple answer, but there are a few questions you should ask yourself before selecting the server/location for your specific needs. Here are those questions:

What do you need a VPN for?

The first thing you should determine — think about — is what do you need a VPN for? Some of the most popular use cases for a VPN include:

Mostly, though, people get a VPN for a mixture of reasons. Say, they like being anonymous and also would want to keep their access to Netflix when traveling to other countries.

The activities you want to do online should determine the choice of a VPN service provider. Still, it is worth adding that best VPNs tick multiple — if not all — boxes.

Location-wise, which VPN server should you connect to?

Related to the previous point, the server location has a lot to do with what you’re trying to do. For instance, in order to get access to the best possible catalog of movies and TV shows, you’ll want to connect to a US-based server.

On the other hand, for business purposes, your company may be requiring connections from specific locations in which case you will look for servers in that area for work purposes.

And finally, server selection isn’t as big in high-censorship countries where you can only choose between a few locations.

In a nutshell, the server location is (or should be) based on what you’re trying to accomplish at any given moment.

How fast your VPN needs to be?

Sure, you’ll want to answer the fastest possible, but in some cases that won’t cut it — and may not even be necessary. For instance, torrenting can work with less bandwidth as the files are downloaded in the background. And the same goes for regular web browsing and even most video streaming — except if you want to watch movies in 4K.

On the other hand, if you live or work in China, your primary objective could be to bypass what is commonly referred to as the Great Firewall of China and not every VPN is up for the task. In this case, we suggest you go through our list of Best VPNs for China that has all the field-tested services which have been proven to work.

Again, you may want to say “give me all the privacy you have” but that’s not how it goes. For start, you’ll want to sign-up with a VPN provider that has a zero logs policy. What that means is that it doesn’t keep logs of what users are doing while connecting through its servers. The best VPNs have such policies in place, but you may want to double-check them, nevertheless.

In addition, you may want to go with a VPN service that isn’t based in the fourteen eyes countries — which represents the group of countries that have agreed to share intelligence data. Furthermore, some countries require ISPs to keep logs whereas such practice doesn’t exist in some other countries.

A few of the top services know that some users are wary of governments spying on them so they opted to incorporate in exotic locations. Among those that took these extra steps are ExpressVPN and NordVPN.

As we have said it multiple times in the best, we suggest you start by checking our list of Best of the Best VPNs. All of them are highly secure and won’t let you down. Otherwise — if it happens during the first month or so — you can ask for your money back. That’s how professional they are.