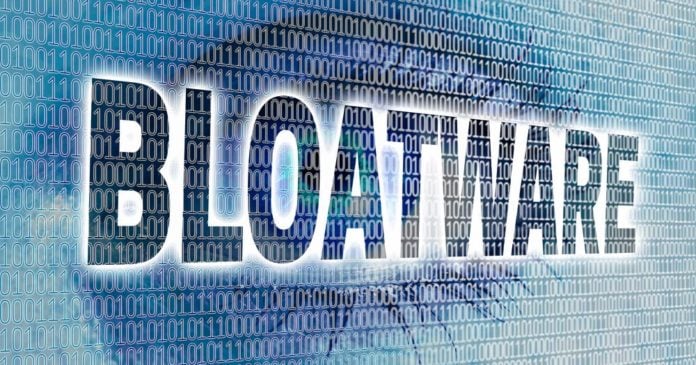 You may have heard of the term but are unsure what it means. Today, we will tell you what bloatware is and what you can (and should) do about it.

Simply put, bloatware is unwanted software that comes pre-installed on new PCs, laptops, and mobile devices by the device manufacturer, OS developer, or mobile operator. It is not malicious, but it can use up system resources and can slow down your device.

In many cases, bloatware comes in the form of third-party software that is free to use for a limited time — i.e. free trial — after which you are required to buy a license or a subscription to the full software. In that sense, bloatware is part of a business deal between the device maker or mobile operator and the software developer — which hopes that once you have tried using their software, you will pay to continue using it.

Probably the most well-known bloatware example involves an anti-virus software that comes preloaded with new PCs. Also, many Windows PCs come preloaded with a free trial of the Microsoft 365 (Office 365) suite.

Alas, those two are seldom the only pieces of software that come with new PCs, and little by little, your brand new computer (or a mobile device) is getting slower. Which is why you may wonder…

Does bloatware pose a security risk?

Generally speaking, bloatware isn’t harmful as device makers and mobile operators take extra time to select partners to preload their software on new computers, tablets, phones, and so on.

However, there are so-called “adware” apps that send a lot of information back to their developers, which are then used to target you with personalized ads. Heck, we’ve seen adware apps even show pop-up ads on your device’s screen. One such example came from Lenovo which, at some point, pre-installed Superfish spyware on its machines.

At the beginning of 2015, said software installed a self-signed certificate authority, which then enabled the Superfish developer to show Lenovo users ads even on SSL-encrypted pages. This also opened up the possibility of criminal hackers extracting the private key used by Superfish and using it to sign their own certificates — which they could then use to spy on Lenovo users if they were on the same network.

Microsoft responded to this potential threat by releasing an update for Windows Defender, which removed Superfish. Moreover, a class-action lawsuit was filed against Lenovo over the incident, resulting in the company paying $7.3 million in damages to customers who had been affected. Like that’s not enough, in 2017 – Lenovo was forced to make a settlement with the FTC, in which it agreed to be monitored by the FTC for 20 years.

Aside from adware, bloatware could also include apps with vulnerabilities, which can be exploited by malicious actors to get ahold of users’ data or cause havoc in some other way.

Aside from third-party bloatware apps, there are also those that are provided by the platform developers — i.e. Apple, Microsoft and Google — and which too could look like bloatware. However, these are usually well-made and don’t pose any security risk.

Nevertheless, over time, they may cause your device to slow down and if you don’t use them — why not remove them. That, however, is easier said than done as in some cases – you can’t completely delete some of these apps.

Take the Chrome browser on Android as an example. Since there are other options out there, you may want to ditch it for some other browser. Well, you can disable Chrome but you cannot fully delete it.

And the same could be true for other browsers that may come pre-installed on some Android devices — that’s what the open-source nature of Android allows handset makers to do — add their software if they want to. Samsung is the main culprit here and you’ll have a hard time uninstalling some of their apps.

Furthermore, we’ve seen a few Android device makers pre-installing such apps as Facebook Messenger and even baking it into the platform core so that you can’t easily remove it from the phone (or tablet).

How to fight bloatware?

First, you can opt for a platform that comes without any bloatware, but unfortunately, the list only includes two operating systems – Linux and Chrome OS. The latter is getting increasingly popular and is easy to use, whereas the former — despite the advances in the UI — could prove challenging for many non-tech folks.

The other option is to remove all bloatware you can. Go to the Settings and then some App Management screen (it’s called differently in different operating systems) and find a way to delete the apps you don’t need. As we’ve noted above, that could be easier said than done, and in some cases — you’ll have to do extra research in order to find a way to remove an app from your phone/tablet/computer. Nonetheless, we do think it could be an effort worth taking.

Bloatware is something most people don’t like. In some cases, however, it helps the device maker come up with a more affordable device with the third-party software vendor effectively subsidizing the cost of hardware. That’s what those pre-installed antivirus solutions are for.

Still, we’ve seen it causing incidents in the past (that Lenovo case) and chances are, something similar could happen again. Also, some of these apps will definitely make your device to slow down over time.

So, yes – we do advise everyone to find some time and uninstall all of the apps he/she doesn’t need or use. An extra effort may be required but it’s all well worth it. Cause in the end, you’ll get a much leaner device that will serve you for a longer time. Good luck!