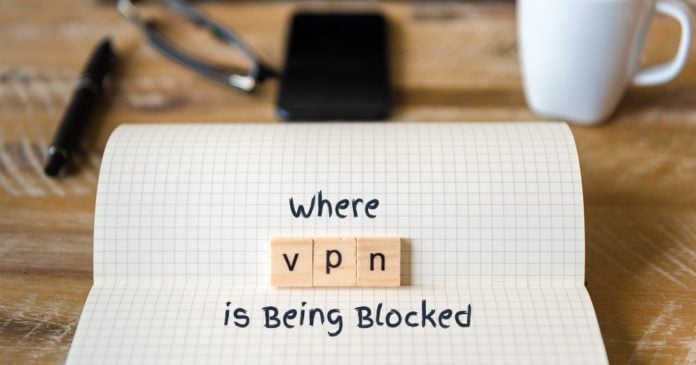 For one reason or another, we are in the midst of growing Internet censorship all around the world. Whether it’s fake news, fishy medical advice or — in some cases — real news, (some) government regulations are threatening global internet freedom and security.

On their end, users are turning to VPNs to bypass these and any other restrictions, but sometimes even VPNs can’t help. At least not all of them.

In this article, we want to explore the subject of where, why and how VPN is being blocked. Let’s start with the “how” part…

How VPN is being blocked?

VPNs do their “magic” using VPN protocols. Some of the most popular protocols include OpenVPN, L2TP/IPSec, SSTP, IKEv2 and PPTP; also there are several proprietary solutions used by the likes of Hotspot Shield and VyprVPN.

The “problem” is that the use of some of these protocols could be detected by high-tech software employed by certain government agencies; and once that happens, they can cut off the affected device (computer, smartphone or tablet) from the Internet.

Additionally, when the usage of some protocols couldn’t be detected, high-tech censors are targeting specific IP addresses that are used by VPN service providers. On their end, savvy VPN providers are continuously buying new IP addresses to stay ahead in this cat-and-mouse game with the government. Also, some of them are developing their own technologies and tools to allow users to access the Internet in its entirety from all parts of the world.

Why VPN is being blocked?

The answer to this question depends on who’s blocking the use of VPN.

For instance, governments block the use of VPNs so they could control the media landscape in their countries. Cause without a VPN, local population may not be able to access major media sites, Facebook, YouTube, Twitter and so on — and only get one (official) take on the story. Governments do this to control the flow of information.

On the other hand, some video streaming services may also block the use of VPNs and they do it for the same reason they block access to some of its content from all around the world. The contracts they have with content rights holders force them to make such moves. They are obliged NOT to allow access to some content to people in certain countries; as part of this agreement, they should also give their best to block the use of VPN services — which tend to be used to bypass these restrictions.

Unfortunately, the number of countries that are blocking the use of VPN services is growing with the day. Here are those that top this infamous list.

North Korea
When it comes to any kind of freedoms, North Korea is by far the most repressive place in the world. Nevertheless, you should be able to use a VPN when visiting Pyongyang (the country’s capital) if — and this is the tricky part — you can get internet access in the first place. Instead of censoring the internet, the local government took an additional step and banned the entire internet for the majority of the population. Those lucky enough who can surf the web will get a rather limited experience with little to no news websites loading up for them.

China
Users in China are free to access the internet but not all of it. For instance, popular social networks like Facebook and Twitter are not available in the world’s most populous country and the same goes for YouTube, many news websites and so on. Also, because the country employs tech-savvy sensors, it is not easy to bypass what is commonly referred to as the Great Firewall of China. Not every VPN will get the job done and the government is putting an extraordinary effort to continuously shut down new VPN servers. Nevertheless, a few VPNs still work. (Related: 5 Data Security Tips for Your Next Trip to China)

Saudi Arabia
The Saudi regime is well known for media censorship, relying on lax laws created under the premise of anti-terrorism and cybercrime prevention. Said laws allow the government to “legally” jail whistleblowers, journalists, social media users, and bloggers. The most infamous example of how things “work” in Saudi Arabia was the clandestine execution of Jamal Kashoggi, a Washington Post columnist, in October of 2018. So, if your travels lead you to Saudi Arabia, you should install a VPN before hitting the ground.

Iran
The situation is similar in Iran though there are slightly more freedoms. The government wants you to believe that the press is free in the country, but the situation is very different on the ground. For start, foreign press is allowed in Iran, but it is closely monitored by government agencies. Also, journalists that deviate from the official narrative could be stalked and harassed, with regular users turning to the internet for access to the real news. There, however, the situation is similarly complicated with the government censors blocking popular social media sites and streaming platforms. Nonetheless, you can bypass these restrictions with a good VPN.

Belarus
Alexander Lukashenko, President of Belarus since 1994, instituted a law on mass media that gave the government a ton of power to regulate what people read, listen and watch in the former Soviet republic. Said law includes restrictions on the propagation of “fake news”, intentionally leaving a lot of room on the definition of what constitutes fake news. And that room makes it possible for the country’s censors to forbid access to certain websites and services.

Cuba
Even though the Soviet Union dissolved in 1991, Cuba kept communist practices of watching every step its constituents make. So it extended information control from offline to online, making it hard to access Facebook, Twitter and many news websites from the island nation. For start, the government makes it difficult for the majority of citizens to connect to the internet.

Vietnam
Another communist country on the list that aims to control all information its constituents have access to. All Vietnamese journalists must be approved by the (communist) party, whereas journalists from outside of Vietnam are required to be supervised by the government. This “powerful combo” ensures what the party thinks will ensure the stability of its regime. Add occasional jailing of journalists to the mix and you get a place where people have to turn to VPNs in order to access real news and learn what’s going on in their own cities and towns.

And that’s not all… Other “worthy” contenders in this list include Eritrea, Turkmenistan, and Equatorial Guinea, as well as Turkey and Russia.

Other places that block VPNs

Aside from the mentioned high-censorship countries, you may see your VPN not working in some other places, as well. Think: schools, universities, and some workplaces which are already employing select Internet restrictions. Some of them went another step forward and decided to block the use of VPNs, as well.

Luckily it is not easy to block the use of VPNs so there are still a very few places that will even try this, but we’re certain that — unfortunately — this is a growing category.

How can you bypass Internet restrictions

As we are always saying it – everyone should be using a VPN these days. It will not only keep you protected online but will also allow you to access the internet in its entirety. In addition, a VPN will also let you access popular streaming services from all corners of the world, download and upload files via BitTorrent, and so on. Whatever you do online, your identity will remain anonymous with a VPN hiding your whereabouts from prying eyes, such as major corporations and various government agencies…

If you still don’t have a VPN, start by checking our list of Best of the Best VPNs and take it from there. You know it’s worth it. 😉