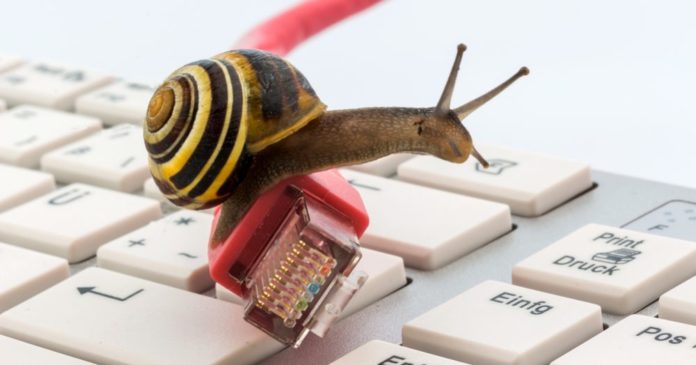 We get asked this a lot – why does my VPN slow down the Internet?

The slower Internet connection could be caused by different reasons, and yes – a VPN could be the one to blame. After all, it routes all Internet traffic through its servers.

For instance, if you’re connecting using a blazing-fast gigabit network, chances are a VPN will slow down your experience a bit. Or not – depending on what you do.

Like, if you’re using a VPN for torrenting or watching movies using Popcorn or Kodi, you may even get slightly faster speeds as some ISPs are known to throttle peer-to-peer (P2P) traffic.

Nevertheless, you should always check whether the slowdown is really due to a VPN.

This is easily done by conducting a speed test without a VPN and then repeating it with a VPN turned on. This could give you a general idea of where the problem lies. But, in order to get the best result, you should connect to the server that is closest to your location — that will be the fair fight.

Say, you see that a VPN is slowing down your Internet, try one of these steps:

The general rule of thumb is to always connect to the server that is closer to where you live. It is only natural that the speed will go down if you’re routing Internet traffic using a server on the opposite side of the globe.

Nevertheless, this may be needed if you want to access content that is local to Europe, the U.S. and so on. For those occasions, connect to that far off server, watch the show and then return to the server that is near you (to keep the anonymity online).

WireGuard is the name of the game and you should manually select it if it’s available — and if for some reason it hasn’t been selected as a default option. This is the newest VPN protocol that has proven to deliver the fastest download and upload speeds — and we love it for that.

If WireGuard is not available on your VPN provider, go for OpenVPN – which isn’t as fast but is certainly reliable. For what it matters, this used to be our favorite protocol until we tried WireGuard.

And if you’re using Hotspot Shield, you can’t do anything regarding the VPN protocol – it uses the company’s proprietary Catapult Hydra protocol which is also very, very fast.

MultiHop, which is also known as Double VPN, will make two VPN connections instead of one. The one will be to a far-off server and the other connection will be to the one that is closer to you.

This way, you will get data from the server closer to you which, in turn, will be the one sending your request to the distant server, and which will then route those requests to actual web pages and files.

The best VPNs support this feature and you may want to try it out to speed-up your VPN connection.

Chances are, like all of us, you’re running many apps on your computer and other devices, some of which may be craving the Internet at all times. It is these apps that could be slowing down your connection and you should see whether you can identify them and shut them down.

Hop over to Task Manager to determine what’s eating your computer’s resources and play around. Try closing some apps and see if that helps.

Note that turning off some software may be temporary and you can start it again once you finish what you wanted to do online.

This is what we would consider the “weapon of last resort” but we may just as well try it out first.

Beyond your computer, do this with other devices as well to clear out all the cache memory. Also, restart your router (turn it off and on – if there is no dedicated button).

Perhaps someone has been connecting to your network without your permission? This will, at least temporarily disconnect them from the router. And then — if you suspect something like that — you could change your password.

If all of the above doesn’t help, consider getting a different VPN provider. Before making the move, you may want to contact the VPN’s support and explain your (speed) problem. They may be able to help with, for instance, specific settings you may not be aware of.

And if all that doesn’t help, it’s time to switch boats. For that step, we suggest checking out our page with Best of the Best VPNs which should cover all your needs and won’t let you down.