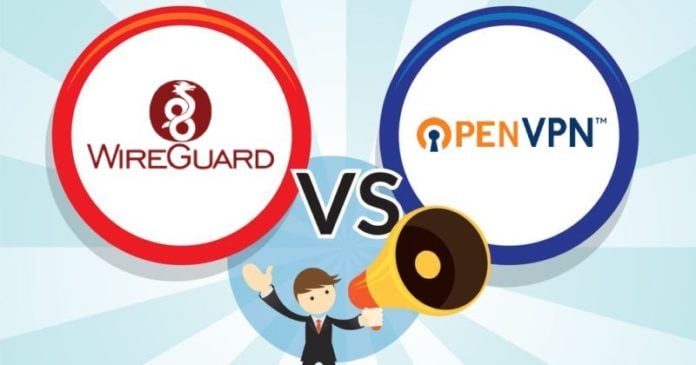 If you’re new to VPNs, you should know they do their “magic” with the help of VPN protocols.

Just until recently, OpenVPN was everyone’s best choice and then WireGuard was introduced causing a small revolution in the industry. It’s lighter and faster, but not as secure as OpenVPN. And so major VPNs started adding an extra layer of security to make it as secure as OpenVPN only faster.

That being said, you could still “get away” with OpenVPN and benefit from rock-solid download and upload speeds. But if there is an option – go for WireGuard. Here are the details…

Speed
WireGuard is a clear winner here, providing consistently fast speeds no other VPN protocol can deliver. Beyond sheer download and upload speeds, WireGuard also connects more quickly (in around 100 milliseconds), while also providing less frequent random disconnects (which do happen with all protocols). In comparison, OpenVPN is not as lean and takes longer to establish a connection with a server.

Encryption
WireGuard uses one set of protocols and ciphers, including ChaCha20, Poly1305, Curve25519, BLAKE2s, and SipHash25. This is done to reduce the complexity of the code and attack surface that hackers can exploit. On the other hand, OpenVPN is more flexible as it can run various protocols and ciphers via the OpenSSL library like AES, DES, RSA, and SHA-1. So on the surface, we would give this round to OpenVPN while adding that major VPNs have been adding new encryption capabilities to WireGuard to make it (in some instances) as secure as OpenVPN. That being said, we must add that both are highly secure protocols.

Security
There are no known security vulnerabilities associated with OpenVPN. Its code has been around for quite some time and has been audited several times by many security experts. The same goes for WireGuard, which has a smaller codebase that makes its auditing easier. So it’s a tie in this round.

Privacy
Another round that goes slightly to OpenVPN as it doesn’t store any personally identifiable information on users, such as their IP addresses. Paired with a zero-logs VPN, it can truly make you anonymous online. On the other hand, WireGuard brings along some privacy concerns as its Cryptokey Routing algorithm stores users’ IP addresses on the VPN server until it reboots. This is another thing that major VPN providers have fixed with their custom solutions so they wouldn’t keep any user data on their servers.

Auditability
As noted above, WireGuard’s code base is much smaller than the one of OpenVPN. This makes its auditing easier with a single individual being able to do it in a relatively short period of time. In contrast, OpenVPN’s code base is more complex and tends to require a small team to go through the code line by line. Then again, it’s been around for long and if there were any errors, someone would’ve caught them by now.

Mobility
These days, many folks access the Internet from their phone and tablets, often switching between Wi-Fi and mobile networks. This network transition shines with WireGuard, whereas OpenVPN struggles when users regularly move between networks. This is the main reason why some VPN services suggest using IKEv2/IPSec protocol for mobile devices. Another win for WireGuard.

Bypassing censorship
OpenVPN is better for bypassing censorship as it can work both over TCP and UDP. If the country’s censor decides to block UDP transfers, WireGuard can’t work. With OpenVPN, you get a choice and that choice could be the difference between accessing some news website and seeing “you can’t access this page” message. BTW: this is the reason why the best VPNs provide support for multiple protocols.

Compatibility
As an older protocol, OpenVPN works on more platforms though that may not be a dealbreaker for the majority of users. All of the popular devices are “covered” with WireGuard, including those running Windows, MacOS, Linux, Android and iOS. OpenVPN builds on top of that list to also include some smaller platforms such as Solaris, QNX, Maemo, FreeBSD, and so on.

We would say you should get a VPN that supports multiple protocols and that includes almost all services on our Best of the Best VPNs list. Except when you’re visiting a high-censorship country, use WireGuard or some other proprietary protocol based on WireGuard (that’s what VPNs do). Then, when you land in a place where press isn’t free, change protocol to OpenVPN and you’re good to go. It’s a 2 or 3 click process and well worth the effort…