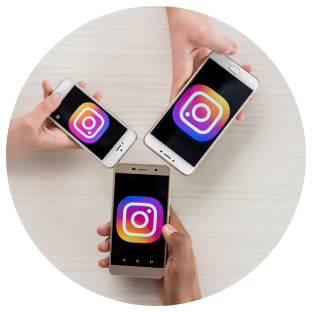 Instagram may be one of the most popular social networks in the world, but that doesn’t mean you can access it in every country. Heck, even some companies and schools in the West prohibit access to Instagram.

Luckily, there are good VPN services that let you bypass all kinds of restrictions, whether they have been enacted by a government or some organization. In other words, with a VPN app running your computer, smartphone, tablet or router — you can get around those restrictions and access Instagram… and do so much more.

For the best VPN for Instagram (and other things), we suggest going through the list below. All of these services “get the job done,” but for the best experience — grab the one at the top, and let it to its magic in the background while you safely and securely access every corner of the Interwebs. It’s actually that easy. 😉

There is a reason why NordVPN is one of the most popular VPN services in the world. Its network counts more than 5,000 servers in over 60 countries — which directly translates into faster connection speeds.

NordVPN is also very secure, relying on the strong 256-bit encryption that is combined with secure VPN protocols (OpenVPN, WireGuard and IKEv2/IPSec). But as a user, you get a seamless experience with all this technology working for you in the background.

NordVPN is well suited to pretty much every task you throw at it — accessing Instagram being just one of them. You can also rely on NordVPN to access other banned sites and video streaming services like Netflix and Disney+ — or just to keep a low profile on the web. It also doesn't keep any logs.

Astrill is all about privacy and also one of the few VPNs that still works in China. So yes, it will let you access Instagram from anywhere.

Astrill is certainly not the most affordable option on the market, but it gets the job done and that's what matters the most.

In addition to Instagram, Astrill will have your back whether you need it for accessing video streaming platforms like Netflix or downloading files via BitTorrent — all while keeping your identity under the radar. And this is especially true if you live or work in China where the company's stealth protocols kick in to let you access all the popular sites that are by default blocked by the country's censors.

Astrill's apps are easy to use and available on all imaginable devices. Nevertheless, they still manage to provide a host of advanced features tech-savvy folks will appreciate. A highly recommended service.
3

ExpressVPN is one of the best VPS services and is well suited to bypass any Instagram ban an ISP or country censors throw your way.

There are a few other VPNs that come close — and in some cases can even outshine ExpressVPN — but as far as the majority of users are concerned, this is the best VPN service they could buy.

However, what makes it stand out is its ease of use. One could tell a lot of time has been spent making sure even the advanced features are easily accessible. Plus, let's not forget ExpressVPN's speed which tends to leave other services in the dust. So whether you need a VPN for Instagram or anything else - ExpressVPN won't let you down.
4

PrivateVPN is an all-round performer despite having a relatively small network of servers. We have found it impressive that both download and upload speeds top the charts, and the fact that you can use PrivateVPN for just about anything — accessing Instagram included — makes it one of the best services on the market.

You can also rely on PrivateVPN for streaming and torrenting without paying a premium. It is one of the most affordable options in its league and we love it for that.

Customer support could be better but it's not like you should experience any problems in the first place. You will get the same level of security and privacy as with other services, and a single license will let you run PrivateVPN on up to 6 devices. Pretty cool.
5

VyprVPN offers a high level of privacy and is especially useful for those traveling to places like China where their online activities may be limited by the country's Internet censors.

It manages to bypass restrictions in high-censorship countries by relying on its proprietary Chameleon protocol, which can easily slide under the radar. The same capability lets VyprVPN users access Instagram from wherever life takes them.

VyprVPN is also great for accessing services such as Netflix, Disney+, HBO and so on — delivering the true buffer-free experience every single time. It will also work with BitTorrent and Kodi media player.

Created by Kevin Systrom and Mike Krieger, the popular photo and video-sharing social network Instagram was launched back in 2010 – allowing users to upload media, which can then be edited with filters and organized with tags and location information. Every post can be shared publicly or with pre-approved followers. Users can like photos, browse and follow other users, and view trending content.

Originally an iPhone-only service, it got an Android app in 2012 – followed by a feature-limited web-based service. From there, support for other platforms was added — including Fire OS in June 2015 and Windows 10 in October 2016.

Instagram was on a fast-growth trajectory ever since launching back in 2010. Here are the key dates and numbers:

With all that success, one would think Instagram can be reached from all around the world, but…

You don’t need a VPN if you access Instagram from any democracy in the world. Heck, even most countries with less than stellar freedoms will let you cyber-schmooze on Instagram. Then there are other places like China, which blocked it following the 2014 Hong Kong protests because a lot of videos and photos are posted.

Also, Turkey is known to periodically block social media sites and Instagram was among those affected. Similarly, you can’t always (if ever) access the service in Iran and Syria, and we would assume the situation is similar in a few other countries in the Middle East.

Finally, there is North Korea where people have a hard time accessing the Internet let alone social media.

So, you will need a VPN to keep your access to Instagram no matter where you happen to be.

You need a VPN for many things, not just for accessing Instagram. Therefore, you should get an all-encompassing VPN that will:

Best services that check all these boxes — while also working with Instagram — include the following: