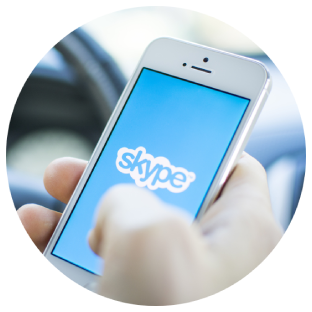 For some reason, there are countries and organizations that prevent people from using the single most popular VoIP app – Skype. While we strongly disagree with such policies (and practices), no one is asking us for opinion. 🙁

Luckily, there are many VPN services that — once installed — let you seamlessly use Skype, no matter where you happen to be at that moment. The keyword here is “seamlessly” as many VPNs promise to deliver such an experience, but fail to do so.

Don’t you worry though, cause we did the grunt work of trying all the various options, only to come up with the list of proven VPN services. Our list includes those that have been “field-tested” to work in most places around the world, and selecting any one of them will let you Skype whoever and whenever you want.

So are you ready to join the Skype party? Check out the VPNs below:

There is a good reason why NordVPN is one of the most popular VPNs in the world, and one of our personal favorites, too.

Its network has 5,000+ servers spread across 60 countries, which directly translates into faster download and upload speeds. NordVPN is also very secure, relying on the strong 256-bit encryption combined with secure VPN protocols (OpenVPN, WireGuard and IKEv2/IPSec). But as a user, you get a seamless experience with all this technology "doing its thing" in the background.

NordVPN is well suited to pretty much every task you throw at it — accessing Skype being just one of them. You can also rely on NordVPN to access other banned sites, torrenting, video streaming services, or just to keep a low profile on the web. It also doesn't keep any logs and has an independent audit to prove that.

NordVPN is highly recommended to anyone looking for a reliable VPN.
2

Astrill is all about privacy and also one of the few VPNs that still works in China. So yes, it can also handle any Skype ban, as well.

Astrill is not the most affordable option on the market, but it gets the job done and that — we think — matters the most.

In addition to Skype, Astrill will have your back whether you need it for watching popular TV shows and movies on a streaming platform, or downloading files via BitTorrent — all while keeping your identity under the radar. And this is especially true if you live or work in China where the company's stealth protocols kick in to let you access all the popular sites that are by default blocked by the country's censors.

Astrill's apps are available across platforms and devices, and are easy to use. Nevertheless, you get a host of advanced features tech-savvy folks are used to get. A highly recommended VPN.
3

ExpressVPN is one of the best VPS services in the world (if not the best) and is well suited to bypass any Skype ban your ISP or country censors throw your way.

There are a few other VPNs that come close, but as far as the majority of users are concerned — this is the best VPN service they could sign-up for.

ExpressVPN has great desktop and mobile apps as well as browser extensions. Also, it is well suited for video streaming services such as Netflix, Disney+, HBO Max, BBC iPlayer, Hulu and others.

However, what makes it stand out is its ease of use and we can't emphasize this enough. One could tell a significant amount of time has been spent making sure that even the advanced features are easily accessible. And we love it for that. Plus, let's not forget ExpressVPN's speed which tends to leave other services in the dust. So whether you need a VPN for Skype or anything else - ExpressVPN won't let you down.
4

PrivateVPN is an all-round performer despite the fact that its network is much smaller than that of its rivals. We have found it impressive that both download and upload speeds top the charts, and the fact that you can use PrivateVPN for just about anything — making Skype calls included — makes it one of the best services on the market.

You can also rely on PrivateVPN for torrenting and streaming without paying a premium. It is, in fact, one of the most affordable options in its league and we love it for that.

VyprVPN offers a high level of privacy and is especially useful for those frequently traveling to places like China where your Internet access may be limited by the country's censorship practices.

It manages to bypass restrictions in high-censorship countries and elsewhere by relying on its proprietary Chameleon protocol — which can easily slide under the radar. The same capability lets VyprVPN users access Skype from all around the world.

VyprVPN is also great for accessing video streaming services such as Netflix, Disney+, HBO Max and so on — delivering the true buffer-free experience you can rely on. It will also work with BitTorrent, and consequently - Kodi.

One of the most popular VoIP apps, Skype is available across platforms and devices — allowing users to make audio and video calls, chat and send files over the Internet. Skype-to-Skype calls are free, while calls to landline telephones and mobile phones have a price tag that is typically lower than that of traditional telecom companies.

Skype’s name is derived from “Sky peer-to-peer“, which was then abbreviated to “Skyper”. However, some of the domain names associated with “Skyper” were already taken. Dropping the final “r” left the current title “Skype”, for which domain names were available.

Key things to know about Skype:

Skype’s division headquarters are in Luxembourg, but most of the development team and 44% of all the division’s employees are still situated in Tallinn and Tartu, Estonia.

Skype is banned in some places

Each region has different motives and policies that influence Skype service blocks. As Skype offers free video calls over the internet, some telecom companies fear for lost revenue and block all VoIP apps, not just Skype.

The easiest way to bypass the Skype block is to use a VPN. It will help you hide your activity from the government and ISP surveillance and won’t lag the connection.

You need a VPN for many things, not just for accessing Skype. A good VPN will:

The top contenders that check all these boxes — while also working nicely with Skype — include the following: