Best VPNs for Snapchat in 2022 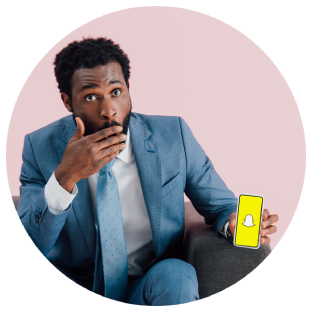 Snapchat may be one of the most popular social networks in the world, but that doesn’t mean you can access it in every country. Heck, even some companies and schools in the West prohibit access to Snapchat.

Luckily, there are good VPN services that let you bypass all kinds of restrictions, whether they have been enacted by a government or some organization. In other words, with a VPN app running your computer, smartphone, tablet or router — you can get around those restrictions and access Snapchat… and do so much more.

To get the best VPN for Snapchat (and other things), we suggest going through the list below. All of these services “get the job done,” but for the best experience — grab the one at the top, and let it do its magic in the background while you safely and securely access every corner of the Interwebs. It’s actually that easy. 😉

NordVPN is one of the most popular VPN services in the world, and one of our personal favorites, too.

Its network counts more than 5,000 servers in over 60 countries — which directly translates into faster connection speeds. NordVPN is also very secure, relying on the strong 256-bit encryption combined with secure VPN protocols (OpenVPN, WireGuard and IKEv2/IPSec). But as a user, you get a seamless experience with all this technology working for you in the background.

NordVPN is well suited to pretty much every task you throw at it — accessing Snapchat, being just one of them. You can also rely on NordVPN to access other banned sites, torrenting, video streaming services like Netflix and Disney+ — or just to keep a low profile on the web. It also doesn't keep any logs.

Astrill is all about privacy and also one of the few VPNs that still works in China. So yes, it can also handle Snapchat bans, as well.

Astrill is not the most affordable option on the market, but it gets the job done and that — we think — is what matters at the end of the day.

In addition to Snapchat, Astrill will have your back whether you need it for accessing video streaming platforms or downloading files via BitTorrent — all while keeping your identity under the radar. And this is especially true if you live or work in China where the company's stealth protocols kick in to let you access all the popular sites that are by default blocked by the country's censors.

Astrill's apps are easy to use and available on all imaginable devices. Nevertheless, they still manage to provide a host of advanced features tech-savvy folks will appreciate. A highly recommended VPN.
3

ExpressVPN is one of the best VPS services and is well suited to bypass any Snapchat ban your ISP or country censors throw your way.

There are a few other VPNs that come close — and in some cases even outshine ExpressVPN — but as far as the majority of users are concerned, this is the best VPN service they could buy.

However, what makes it stand out is its ease of use and we can't emphasize this enough. One could tell a lot of time has been spent making sure even the advanced features are easily accessible. And we love it for that. Plus, let's not forget ExpressVPN's speed which tends to leave other services in the dust. So whether you need a VPN for Snapchat or anything else - ExpressVPN won't let you down.
4

PrivateVPN is an all-round performer with both download and upload speeds topping the charts. Add the fact that you can use PrivateVPN for just about anything — accessing Snapchat, included — and you get one of the best services on the market. Yes, this includes torrenting and streaming without paying a premium. PrivateVPN is, in fact, one of the most affordable options in its league and we love it for that.

VyprVPN offers a high level of privacy and is especially useful for those traveling to places like China where their web whereabouts may be limited by the country's high-tech censors.

It manages to bypass restrictions in high-censorship countries by relying on its proprietary Chameleon protocol, which can easily slide under the radar. The same capability lets VyprVPN users access Snapchat from wherever life takes them.

VyprVPN is also great for accessing video streaming services such as Netflix, Disney+, HBO and so on — delivering the true buffer-free experience every single time. It will also work with BitTorrent and Kodi.

Created by former Stanford students Evan Spiegel, Bobby Murphy, and Reggie Brown – Snapchat is a popular social media and messaging app that allows (mostly young) users to send pictures and messages that are usually only available for a short time before they become inaccessible to their recipients. That, at least, was the initial idea that made Snapchat popular; today, the service also offers “Stories” with 24 hours of chronological content, along with “Discover” – which lets brands show ad-supported short-form content. It also allows users to keep photos in the password-protected space called “my eyes only.”

The birth of Snapchat

It is said that Reggie Brown brought the idea of disappearing pictures application to Evan Spiegel because Spiegel had prior business experience. The two then pulled in Bobby Murphy, who had experience coding, and worked closely together for several months.

On July 8, 2011 – the first version of Snapchat was launched as “Picaboo” on the iOS operating system. In September 2011, the app was relaunched as Snapchat.

In its first blog post, CEO Evan Spiegel described Snapchat as a service that “isn’t about capturing the traditional Kodak moment.” Rather, it’s “about communicating with the full range of human emotion — not just what appears to be pretty or perfect.”

For one reason or another, Reggie Brown was ousted from the company months after the original app (Picaboo) was launched, but that hasn’t ended then. Consequently, lawyers were involved, and in September 2014 – Brown settled with Spiegel and Murphy for $157.5 million.

The growth of Snapchat

During the years, Snapchat had a wild ride and is one of the most used apps in the world today. Here are some of the key dates depicting that growth:

As of March 2020, Snapchat had 229 million daily active users with more than 4 billion Snaps being sent each day.

Why do you need a VPN to access Snapchat?

You don’t need a VPN to access Snapchat in most countries, but in some places — the service is blocked. For those places, you should use a VPN to first connect to a distant server (say in Europe or the United States), and then freely access Snapchat and other services that may be blocked.

Speaking of blocked services, several countries are blocking access to most popular social media services and Snapchat is, obviously, affected. All the “usual suspects” are there — including China, North Korea (where the Internet itself is hard to access), and a few countries in the Middle East such as Saudi Arabia, Qatar, and UAE.

Like that’s not enough, access to social media (including Snapchat) may also be blocked in some workplaces, universities, schools, and so on. But, again, with a good VPN – you can bypass those and all other restrictions internet censors throw your way.

You (all of us, really) need a VPN for many things, not just Snapchat. A good VPN will:

The top contenders that check all these boxes — while also letting you access Snapchat from anywhere — include the following: