Best VPNs for Social Media in 2021 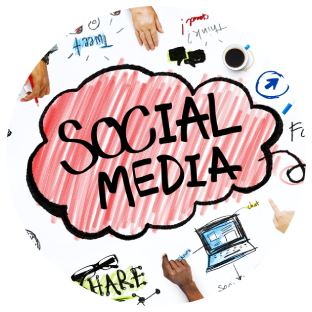 Most people access social media services on a daily basis, but that doesn’t mean these sites can be accessed in every country. Heck, even some companies and schools in the West prohibit access to social media websites.

Luckily, there are good VPN services that let you bypass all kinds of restrictions, whether they have been enacted by a government or some organization. In other words, with a VPN app running your computer, smartphone, tablet or router — you can get around those restrictions and get your social media fix… and do so much more.

To get the best VPN for social media (and other things), we suggest going through the list below. All of these services “get the job done,” but for the best experience — grab the one at the top, and let it do its magic in the background while you safely and securely access every corner of the Interwebs. It’s actually that easy. 😉

Social media is described as a collection of interactive computer-mediated technologies that facilitate the creation or sharing of information, ideas, career interests, and other forms of expression via virtual communities and networks. A variety of different social media services shares a few common features, including:

Users access social media services from the web browser or using dedicated applications — typically on mobile devices. As users engage with social media, they create interactive platforms through which they can share, co-create, discuss, participate, and modify content posted on the service. Networks formed through social media change the way groups of people interact and communicate or stand with the votes.

Social media is different from traditional media in many ways — including reach, frequency, interactivity, usability, immediacy, and performance. For one thing, social media outlets operate in a dialogic transmission system (many sources to many receivers), which is in contrast to traditional media which operates under a mono-logic transmission model (one source to many receivers).

Because of the wide definition of the term social media, there are also other platforms that are sometimes referred to as social media services. These would include YouTube, QQ, Quora, Telegram, WhatsApp, LINE, Snapchat, Pinterest, Viber, Reddit, Discord, VK, and others.

The unifying thing about many of these services is that they could be blocked in some parts of the world, which brings us to the next section…

Why do you need a VPN to access social media?

Social media can and IS blocked in some places, including:

A good VPN can bypass all these restrictions, letting you access the Internet — social media included — in its entirety. And when we say “good” VPN, we mean proven — which is especially important in China where censors use sophisticated technologies to make it harder for users to freely roam the world wide web.

You (all of us, really) need a VPN for many things, not just for accessing social media services. A good VPN will:

The top contenders that check all these boxes — while also letting you access social media sites — include the following: