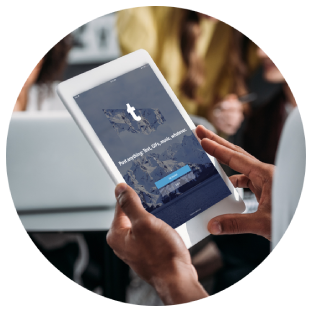 Tumblr may be one of the most popular websites in the world, but that doesn’t mean you can access it in every country. Heck, even some companies and schools in the West prohibit access to Tumblr.

Luckily, there are good VPN services that let you bypass all kinds of restrictions, whether they have been enacted by a government or some organization. In other words, with a VPN app running your computer, smartphone, tablet or router — you can get around those restrictions and access Tumblr… and do so much more.

To get the best VPN for Tumblr (and other things), we suggest going through the list below. All of these services “get the job done,” but for the best experience — grab the one at the top, and let it do its magic in the background while you safely and securely access every corner of the Interwebs. It’s actually that easy. 😉

NordVPN is one of the most popular VPN services in the world, and one of our personal favorites, as well.

Its network counts more than 5,000 servers spread across 60 countries — which directly translates into faster connection speeds. NordVPN is also very secure, relying on the strong 256-bit encryption combined with secure VPN protocols (OpenVPN, WireGuard and IKEv2/IPSec). But as a user, you get a seamless experience with all this technology "doing its thing" in the background.

NordVPN is well suited to pretty much every task you throw at it — accessing Tumblr, being just one of them. You can also rely on NordVPN to access other banned sites, torrenting, video streaming services, or just to keep a low profile on the web. It also doesn't keep any logs.

Astrill is all about privacy and also one of the few VPNs that still works in China. So yes, it can also handle Tumblr bans, as well.

Astrill is not the most affordable option on the market, but it gets the job done and that — we think — is what matters at the end of the day.

In addition to Tumblr, Astrill will have your back whether you need it for accessing video streaming platforms or downloading files via BitTorrent — all while keeping your identity under the radar. And this is especially true if you live or work in China where the company's stealth protocols kick in to let you access all the popular sites that are by default blocked by the country's censors.

ExpressVPN is one of the best VPS services in the world and is well suited to bypass any Tumblr ban your ISP or country censors throw your way.

There are a few other VPNs that come close — and can sometimes even outshine ExpressVPN — but as far as the majority of users are concerned, this is the best VPN service they could buy.

However, what makes it stand out is its ease of use and we can't emphasize this enough. One could tell a lot of time has been spent making sure even the advanced features are easily accessible. And we love it for that. Plus, let's not forget ExpressVPN's speed which tends to leave other services in the dust. So whether you need a VPN for Tumblr or anything else - ExpressVPN won't let you down.
4

PrivateVPN is an all-round performer even though its network is smaller than that of its major rivals. We have found it impressive that both download and upload speeds top the charts, and the fact that you can use PrivateVPN for just about anything — accessing Tumblr, included — makes it one of the best services on the market.

You can also rely on PrivateVPN for torrenting and streaming without paying a premium. It is, in fact, one of the most affordable options in its league and we love it for that.

VyprVPN offers a high level of privacy and is especially useful for those traveling to places like China where your web whereabouts may be limited by the country's censorship practices.

It manages to bypass restrictions in high-censorship countries by relying on its proprietary Chameleon protocol, which can easily slide under the radar. The same capability lets VyprVPN users access Tumblr from wherever life takes them.

VyprVPN is also great for accessing video streaming services such as Netflix, Disney+, Hulu, HBO and so on — delivering the true buffer-free experience every single time. It will also work with BitTorrent, and consequently - Kodi.

The popular microblogging and social networking website was founded by David Karp in 2007 and is currently owned by Automattic. For those who haven’t heard of it, Tumblr allows users to post multimedia and other content to a short-form blog. It also lets users follow other users’ blogs, or they could make their blogs private.

As of August 12, 2019, Tumblr had over 475 million blogs on its platform, while attracting 400 million visitors per month.

Tumblr has a rather interesting history; here are details that we think are cool to know:

Today, Tumblr is still owned and run by Automattic.

Where is Tumblr blocked?

Several countries have blocked access to Tumblr because of pornography, religious extremism or LGBT content. These countries include China, Indonesia, Kazakhstan and Iran.

The service can also be inaccessible in some workplaces and universities, but all that can be “handled” (bypassed) with a good VPN.

You need a VPN for many things, not just for accessing Tumblr. A good VPN will:

The top contenders that check all these boxes — while also letting you access Tumblr from anywhere — include the following services: