Best VPNs for WhatsApp in 2022 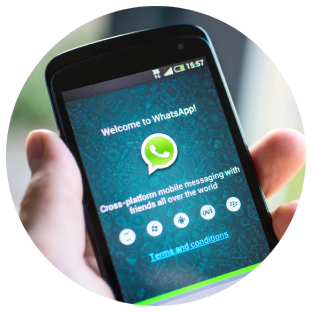 WhatsApp may be one of the most popular messaging apps in the world, but that doesn’t mean you can access it in every country. Heck, even some companies and schools in the West prohibit access to WhatsApp.

Luckily, there are good VPN services that let you bypass all kinds of restrictions, whether they have been enacted by a government or some organization. In other words, with a VPN app running your computer, smartphone, tablet or router — you can get around those restrictions and access WhatsApp… and do so much more.

To get the best VPN for WhatsApp (and other things), we suggest going through the list below. All of these services “get the job done,” but for the best experience — grab the one at the top, and let it do its magic in the background while you safely and securely access every corner of the Interwebs. It’s actually that easy. 😉

There is a good reason why NordVPN is one of the most popular VPNs in the world, and one of our personal favorites, too.

Its network has more than 5,000 servers spread across 60 countries, which directly translates into faster speeds. NordVPN is also very secure, relying on the strong 256-bit encryption combined with secure VPN protocols (OpenVPN, WireGuard and IKEv2/IPSec). But as a user, you get a seamless experience with all this technology "doing its thing" in the background.

NordVPN is well suited to pretty much every task you throw at it — accessing Whatsapp, being just one of them. You can also rely on NordVPN to access other banned sites, torrenting, video streaming services, or just to keep a low profile on the web. It also doesn't keep any logs and has an independent audit to prove that.

Astrill is all about privacy and also one of the few VPNs that still works in China. So yes, it can also handle any Whatsapp ban, as well.

Astrill is not the most affordable option on the market, but it gets the job done and that — we think — matters the most.

In addition to Whatsapp, Astrill will have your back whether you need it for watching popular TV shows and movies on a streaming platform, or downloading files via BitTorrent — all while keeping your identity under the radar. And this is especially true if you live or work in China where the company's stealth protocols kick in to let you access all the popular sites that are by default blocked by the country's censors.

ExpressVPN is one of the best VPS services in the world (if not the best) and is well suited to bypass any Whatsapp ban your ISP or country censors throw your way.

There are a few other VPNs that come close, but as far as the majority of users are concerned — this is the best VPN service they could sign-up for.

ExpressVPN has great desktop apps for Windows and Mac, mobile apps and browser extensions. Also, it is well suited for video streaming services such as Netflix, Disney+, Hulu, HBO Max, BBC iPlayer and others.

However, what makes it stand out is its ease of use and we can't emphasize this enough. One could tell a significant amount of time has been spent making sure that even the advanced features are easily accessible. And we love it for that. Plus, let's not forget ExpressVPN's speed which tends to leave other services in the dust. So whether you need a VPN for Whatsapp or anything else - ExpressVPN won't let you down.
4

PrivateVPN is an all-round performer despite the fact that its network is much smaller than that of its rivals. We have found it impressive that both download and upload speeds top the charts, and the fact that you can use PrivateVPN for just about anything — chatting on Whatsapp, included — makes it one of the best services on the market.

You can also rely on PrivateVPN for both torrenting and streaming, without paying a premium. It is, in fact, one of the most affordable options in its league and we love it for that.

It manages to bypass restrictions in high-censorship countries and elsewhere by relying on its proprietary Chameleon protocol, which can easily slide under the radar. The same capability lets VyprVPN access Whatsapp from all around the world.

VyprVPN is also great for accessing video streaming services such as Netflix, Disney+, Hulu, HBO Max and so on — delivering the true buffer-free experience every single time. It will also work with BitTorrent, and consequently - Kodi.

WhatsApp is a popular cross-platform messaging and Voice over IP (VoIP) service that allows users to send text messages and voice messages, make voice and video calls, and share images, documents, their location, and other media. WhatsApp is available on all popular devices and platforms, only requiring users to provide their mobile phone number for registering with the service.

Originally an independent company, WhatsApp was acquired by Facebook in February 2014 for approximately $19.3 billion. A year after the acquisition, it became the world’s most popular messaging application with over 2 billion users worldwide as of February 2020. WhatsApp has become the primary means of electronic communication in multiple countries and locations, including Latin America, the Indian subcontinent, and large parts of Europe and Africa.

According to the Financial Times, WhatsApp “has done to SMS on mobile phones what Skype did to international calling on landlines”.

Some of the less known features offered by WhatsApp include:

WhatsApp Web
Available in a web browser, WhatsApp Web acts as an “extension of your phone,” mirroring conversations and messages from your mobile device — meaning that all of your messages still live on your phone. The feature is especially popular among the Chromebook users, as well as anyone else who doesn’t want to install another piece of software on his/her computer. Access to WhatsApp Web is granted after the user scans their personal QR code through their mobile WhatsApp application.

WhatsApp Payments
A peer-to-peer money transfer feature, WhatsApp Payments is currently only available in India where it received permission from the National Payments Corporation of India (NPCI) to enter into a partnership with multiple banks to allow users to make in-app payments and money transfers using the Unified Payments Interface (UPI). UPI enables account-to-account transfers from a mobile app without having any details of the beneficiary’s bank. This feature is being pilot-tested with over a million users since April 2019, however, there has not been any update on the final rollout.

WhatsApp Business
In January 2018, WhatsApp launched WhatsApp Business for small business users making it easier for them to respond to customers. In addition, there is also the Enterprise Solution for bigger companies with global customer bases — such as airlines, e-commerce retailers and banks — who would be able to offer customer service and conversational commerce (e-commerce) via WhatsApp chat, using live agents or chatbots.

Where WhatsApp is banned

For one reason or another, WhatsApp is not freely available all around the world. The following countries ban the use of WhatsApp:

You (all of us, really) need a VPN for many things, not just for accessing WhatsApp. A good VPN will:

The top contenders that check all these boxes — while also working nicely with WhatsApp — include the following: