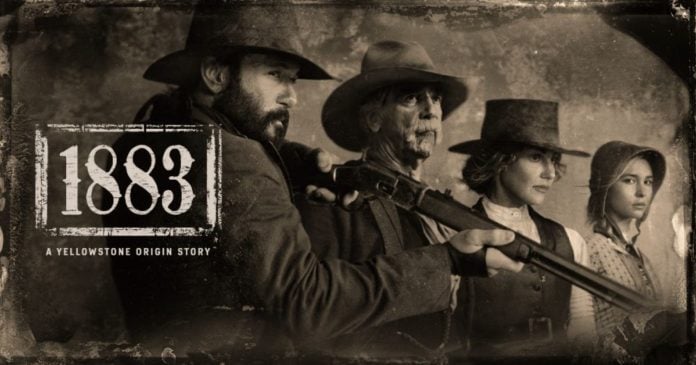 If you enjoyed Yellowstone, you may want to get some background information on how the Dutton family got to own and manage such a big ranch. That’s what 1883 is all about and if you’re fan of the original show, you’ll like this one just as well. At least we do.

Alas, the new series is not available all around the world and in order to join the “watching party,” you will need a VPN. Before we delve into details, let us explain 1883 to those who still haven’t heard of it…

1883 is a prequel to Yellowstone and follows the story of Duttons as they journey from Fort Worth, Texas to Montana to establish what would eventually become the Yellowstone Ranch. The series premiered on December 19, 2021 on the Paramount+ streaming service.

Review aggregator Rotten Tomatoes reported an approval rating for 1883 of 83% based on 18 reviews, with an average rating of 7.3/10. The website’s critics consensus reads, “1883 can feel too overdetermined to be a properly rough-hewn Western, but viewers will want to saddle up for Sam Elliott’s commanding star turn.” Metacritic on its end gave the series a weighted average score of 69 out of 100 based on 12 critic reviews, indicating “generally favorable reviews”.

How to watch 1883 from anywhere

As far as the rest of the world is concerned, some local network or streaming service may’ve picked up the show, but we’re not sure about it. We do know that with a good VPN, you don’t have to worry about any of that.

But, you will still have to sign-up for Paramount+. It is available in a few tiers, with pricing starting from $4.99/month or $49.99/year for the Essential plan. That tier, however, comes with ads.

Once you select the perfect plan for yourself, fire up your VPN app, connect to a US-based server – and you’re good to go. Beyond Paramount+, you will also be able to access just about any streaming service you want.

In addition to letting you unlock and unblock parts of the Internet, a good VPN will also cover other needs you may have and do that across platforms and devices. For instance, it will protect you while using public Wi-Fi hotspots.

These places, in case you didn’t know, are notoriously insecure and if you’re not visiting a secure website – your data is freely flowing through the local network. As such, it could be intercepted by a savvy hacker who may be able to get ahold of your personal information. This is what the so-called “man in the middle” attacks are all about.

With a VPN, everything you do online is encrypted and even if someone manages to get a piece of your traffic, he/she wouldn’t be able to do anything with it.

Moreover, a VPN will hide your online activities from the likes of Google and Facebook, as well as various government agencies — all of which are looking to keep track of us at all times.

And that’s not all… Therefore, we think everyone should be using a VPN these days, and since you’re into watching TV shows – start by visiting our page with Best VPNs for Streaming and take it from there. You can always thank us later. 😉