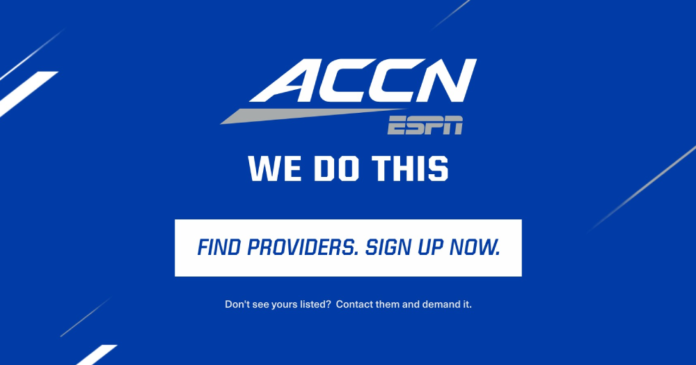 Sports fans were rejoicing when ESPN announced the AAC Network, promising to deliver more sports than you/we could handle. The problem, however, was the network’s availability which didn’t extend to users all across the world, and so some folks have found novel ways to get their sports fix. This article is all about that – how to watch the ACC Network from anywhere. But first, let’s start by explaining what the ACC Network is all about…

The AAC Network for the uninitiated

The Atlantic Coast Conference Network, or ACC Network — or just ACCN — is an American subscription-television channel that is owned and operated by ESPN. Launched in August 2019, it is dedicated to coverage of the Atlantic Coast Conference, operating from ESPN’s headquarters in Bristol, Connecticut — though some programming and staff is based in Charlotte, North Carolina.

Ahead of the television network’s launch and as part of ESPN’s new contract with the conference, ESPN also launched the digital platform ACC Network Extra (ACCNX) on WatchESPN, which streams ACC events not broadcast on television.

ACC Network aims to carry 1,300 events per-year and in order to do that, the ACC agreed to expand its conference schedule in college basketball to 20 games by the 2019-20 season. ESPN also acquired the secondary ACC rights previously sub-licensed to Raycom Sports for its syndicated ACC Network.

How to watch the ACC Network online in the U.S.

In the United States, users can watch live ACC Network online from a few different providers — including Sling TV, Hulu Live TV, YouTube TV, and AT&T TV Now. Let’s briefly see what each of these services also brings to the table, shall we?

Hulu + Live TV
For $54.99/month users get one of the best live TV streaming services with 50 hours of cloud DVR storage, ability to watch on two screens at once, six customizable profiles, and access to the entire Hulu streaming library. The service is available across devices and platforms — including Roku, Fire TV Devices, Apple TV, Xbox One, iOS, Android, Chromecast, and more.

Sling TV
Access to the ACC Network comes included with Sling’s better, Orange package that adds $10/month to the basic Blue plan for a total of $40 per month. With this plan, you get a live stream of ACC Network and ACCNX, along with access to many other channels as well as the Cloud DVR capability that lets you record sports events on your own schedule. Just like Hulu, Sling TV is compatible with all the popular platforms and devices.

YouTube TV
Google’s YouTube TV also lets you keep up with the ACC Network for $49.99 a month. Again, you get to choose the device(s) where you want to enjoy “all that sport” with the popular video service supporting just about any platform on the planet. As an added bonus, you get to watch three streams simultaneously and take advantage of a personal cloud-based DVR service for each of the subscription’s 6 account profiles. Said DVR provides unlimited storage and simultaneous recordings that are available for nine months.

AT&T TV Now
Formerly known as DirecTV Now, AT&T Now offers the ACC Network as part of its “Max” package that costs a whopping $80 per month. For that money, you get access to more than 60 channels with HBO being one of them. They had to justify such a steep price tag somehow.

ESPN app
Last but not the least, you can also get some videos and highlights from the ACC Network for free from the ESPN app. To watch live games, however, you will still need a subscription to one of the four services mentioned above — you will be asked to log in with your Hulu + Live TV, AT&T TV Now, Sling TV, or YouTube TV credentials in order to get the access.

How to watch the ACC Network online from anywhere

If you are not currently in the U.S. or are not from the U.S. in the first place, you will need a good VPN in order to “trick” the above-mentioned services that you’re accessing the Internet from the U.S. soil. That is, however, just one piece of the puzzle as you will still need a valid subscription to Hulu + Live TV, AT&T TV Now, Sling TV, or YouTube TV.

If you’re having trouble setting up one of those accounts — and chances are you will, because of the way content rights are traded on the international market these days — you will have to find an alternative route to open the account. You see, some of these services check whether your credit/debit card is issued by an American bank, and if it’s not — they won’t let you in.

To get around this problem, you are best off using a gift card to pay for the service, and for that – we suggest visiting MyGiftCardSUPPLY.com. There, you will find gift cards for a number of different services; buy one of them, and use that gift card in the sign-up process by selecting the option “pay with a gift card” or something of that sort. Before you know it, you’ll be watching all the live sports you can “handle” with VPN helping you out along the way — just select a U.S.-based server. 🙂

A VPN has more to offer

Aside from letting you access the ACC Network and other geo-restricted content, a good VPN lets you do many other things, as well. For one thing, you get to regain your privacy, making it next to impossible for Big Tech and government agencies to follow you online. This in turn allows you to anonymously browse the web, download files via BitTorrent, and do just about anything without worrying that someone’s watching behind your shoulders.

Moreover, you get to stay connected to popular news sites and social media services while visiting high-censorship countries — where that may not be possible without a VPN. Plus, connecting to public Wi-Fi hotspots is no longer a security challenge, with VPN encrypting all communication between your device and the server (website).

All in all, with a VPN — you get more freedom. And that, we think, is rather important. So yes, you need a VPN and you need it now. Start by going through our list of Best VPNs for Streaming and thank us later.