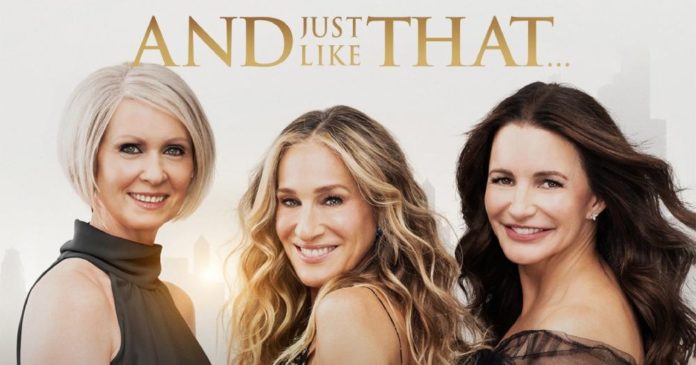 You’ve probably heard that the iconic series Sex and the City is getting new episodes and you want to watch it. Heck, you can’t wait to do so.

Luckily, there is a way to do that no matter where you live. You will need a VPN for the “job,” and once you get one – you will be able to watch And Just Like That… (the series name) from all corners of the globe.

Before we explain how you can join the “watching party,” let us quickly talk a bit more about this highly anticipated series, shall we?

And Just Like That… is a 10-episode revival of the HBO’s popular TV series Sex and the City. Set 11 years after the events of the 2010 film Sex and the City 2, its development began in December 2020, following the cancellation of a third film adaptation. It was given a straight-to-series order in January 2021 by HBO Max. Casting announcements were made throughout 2021 and filming started in July 2021 in New York City.

And Just Like That… premiered on HBO Max on December 9, 2021, with mixed reviews. The series finale was released on February 3, 2022 when viewers were also able to watch the behind-the-scenes documentary.

On Rotten Tomatoes, the series has a 60% approval rating with an average rating of 5.6/10 based on 65 critic reviews. The website’s critics consensus reads, “And Just Like That… fails to recapture Sex and the City’s heady fizz, but like a fine wine, these characters have developed subtler depths with age.” Metacritic, on its end, assigned a score of 55 out of 100 based on 33 critics, indicating “mixed or average reviews”.

How to watch And Just Like That… from around the world?

For the rest of the world, there is HBO Go, which is carrying it in at least some markets. We can’t really tell.

The best way, if you don’t have HBO Go, is to take an “American route” and sign-up for HBO Max. It too is now available in new markets, but the best content selection is always reserved for the U.S.

Luckily, with a good VPN – you can sign-up for it. Just connect to a US-based service and proceed to HBO Max’s registration page. You will still have to pay for access, though.

From that point on, every time you want to watch some movie or TV show from HBO Max, repeat the process of connecting to a US-based server and you’re good to go.

Finally, if you need a gift card to pay for HBO Max, check out MyGiftCardSUPPLY, where you can find gift cards for many streaming services, not just HBO.

Aside from letting you watch any movie or TV show you’d like, a VPN has much more to offer. Arguably its most important feature is the ability to make you anonymous online so that the likes of Facebook and Google can’t (easily) follow you around the Internet. That, of course, presumes that you’re not sharing what you’re doing online.

A VPN does its magic by routing all traffic through its server network, and in the process all data coming to and from your devices gets encrypted. This same capability lets a VPN protect you when using public Wi-Fi hotspots.

Considering that so many organizations want a piece of our data, we think that everyone should be using a VPN these days. That, in fact, is the main reason why we’ve created VPN Reports in the first place — to help folks like you get the right service for any need they may have.

Since you’re into HBO, hop over to our page with Best VPNs for HBO Max and make your pick. All services listed there have been proven to work and you can hardly go wrong by selecting any one of them. And even if you don’t like what you get – there is always an option to ask for your money back during the first 30 days (or so). It’s a risk-free transaction, just the way we like it.