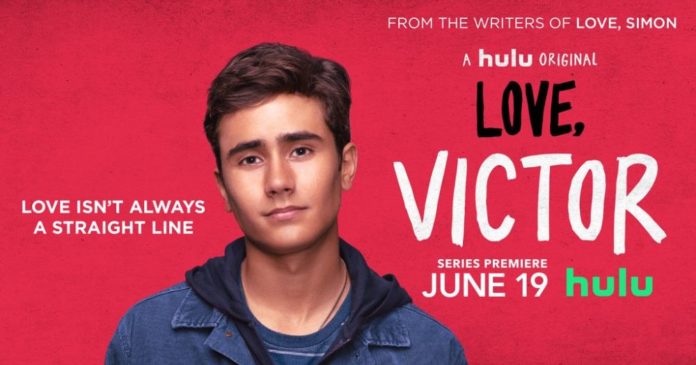 Love, Victor was the most-watched drama on Hulu during its premiere week between June 17 and 23, 2020 — so yes, people all around the world were looking to find a way to join the party. In some places, the series was available on other platforms, but for the best experience — and to access Hulu’s entire catalog — savvy users turned to VPNs to watch Love, Victor (and other Hulu shows). This article explains how you too can join the party. But first, let’s explain Love, Victor for the “uninitiated”…

What Love, Victor is all about?

Love, Victor is a teen drama web television series created by Isaac Aptaker and Elizabeth Berger, inspired by and set in the same world as the 2018 film Love, Simon. The series premiered on June 17, 2020, on Hulu.

It is focused on a new student at Creekwood High School – Victor, a teen from a half Puerto Rican, half Colombian-American family living in Atlanta. The series follows his journey of self-discovery: facing challenges at home and struggling with his sexual orientation. He reaches out to Simon when it seems too difficult for him to navigate through high school.

In August 2020, the series was renewed for a second season.

According to Hulu, the series was the most-watched drama on the service during its premiere week between June 17 and 23, 2020. It was also the most-binged original drama series on Hulu in 2020 during its first week.

Rotten Tomatoes reported an approval rating of 93% based on 45 reviews, with an average rating of 7.15/10; while Metacritic gave the series a weighted average score of 68 out of 100, based on 20 critics, indicating “generally favorable reviews”.

How to watch Love, Victor online in the US?

As noted above – Love, Victor is available on Hulu, allowing users — those in the U.S. of A. — to enjoy it on all their devices. A valid Hulu subscription is required which brings along access to many other great movies and TV shows.

The problem, however, emerges when you want to watch Hulu from other countries. Then, you will need a VPN to trick Hulu’s servers into thinking that you’re on the U.S. soil whereas you can be on the opposite side of the globe. And that’s what we’re discussing in the next section…

How to watch Love, Victor from all around the world?

There’s a chance that some local stations in other parts of the world have picked up Love, Victor and that you may be able to tune in to their website to watch it on your computer, smartphone and/or other devices. If that’s not an option, you can fire-up a VPN, connect to a US-based server and then turn on the Hulu app.

If you, however, don’t have a working Hulu account, you will first need to sign-up for one. For that, you can use a Hulu gift card, which could be purchased from MyGiftCardSUPPLY. At that site, you can also find gift cards for other media streaming services — in case you need them.

Once you have a Hulu account, you can watch as many TV series and movies as you want from any place in the world. Just fire-up that VPN, connect to a US-based server and you’re good to go.

Love, Victor is great but you shouldn’t get a VPN just to watch that one show; cause a VPN has more to offer…

For start, it will let you anonymously surf the web so that the likes of Google and Facebook, as well as various government agencies, can’t follow your digital footprint on the Internet.

Moreover, a good VPN will also let you access other streaming services such as US Netflix, Disney+, Prime Video, BBC iPlayer, and so on. Plus, it will encrypt all your online data which is especially important when connecting to public Wi-Fi hotspots.

A VPN app can run across devices and platforms, with the best services also coming with the router support so you could protect your entire network. This in turn will also make devices like smart TVs, gaming consoles, and streaming boxes that much more secure.

With everyone looking to get our data these days, we think everyone should have a VPN on his/her devices. And if you’re into streaming services like Hulu, we suggest you start with our list of Best VPNs for Streaming and take it from there. All services on that page have been field-tested and won’t let you down. Try them out and thank us later. 😉