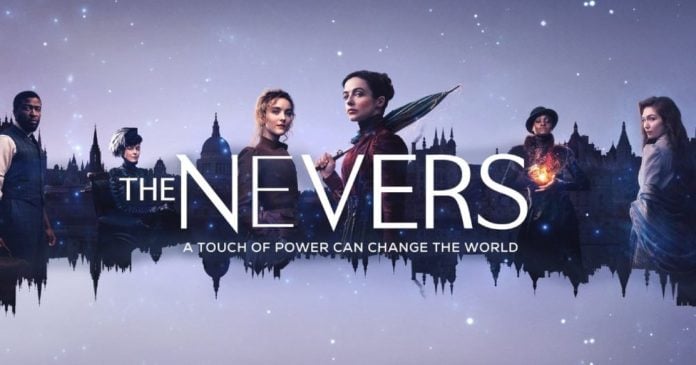 Say you like superhero movies and series, how about the one set in Victorian-era London? That’s what The Nevers is all about. It’s weird at first but then it gets you in and you can’t wait to watch the next episode. No wonder why HBO and Netflix fought over it, with the former coming up with the higher bid.

Before we explain how you too can watch this extraordinary series (pun intended), let us briefly tell you the key things you need to know about The Nevers.

What The Nevers is all about?

The Nevers is a science fiction drama series created by Joss Whedon for HBO. The series premiered on April 11, 2021, with the first season consisting of 12 episodes — split into two six-episode parts — with the second half debuting in 2022.

The Nevers is set in Victorian-era London and follows a group of people, mostly women, known as the Touched, who suddenly manifest abnormal abilities. Among them are Amalia True, a mysterious and quick-fisted widow, and her best friend Penance Adair, a brilliant inventor. The series received a straight-to-series order from HBO in June 2018, after a bidding war with other networks and streaming services including Netflix.

The Nevers is described as “an epic science fiction drama about a gang of Victorian[s] who find themselves with unusual abilities, relentless enemies, and a mission that might change the world.”

Rotten Tomatoes’ critical consensus reads, “Despite strong performances and stellar production design, The Nevers struggles to stitch its slew of intriguing components into a solid show.” On Metacritic, the series has a score of 56 out of 100 based on 26 reviews, indicating “mixed or average reviews”.

Nevertheless, we’ve found it quite entertaining and we’re sure you’ll love it just as much. 😉

How to watch The Nevers from around the world?

If you’re in the U.S. – you can simply sign-up for HBO Max and access all the great content this service has to offer, The Nevers included.

For other parts of the world, there are other HBO channels and HBO Go that may be airing the series, but I’m not 100% certain that is the case.

If you don’t see The Nevers in your local HBO library, you should sign-up for HBO Max and get access to some of the best movies and TV shows on the planet.

If you’re not in the US, you will need a VPN in order to bypass HBO Max’s geo-blocking servers. You will first have to sign-up for the service and for that you may need a gift card — cause they may require one issued in the U. S. of A. For getting one of those, check out MyGiftCardSUPPLY, where you can also find gift cards for other streaming services.

Or you can sign-up for HBO Max through YouTube TV. Again, a VPN is required to connect to a US-based server, but this time you’ll want to open a YouTube TV account. When asked for a ZIP code, enter one you find online.

Then, you can add the HBO Max add-on to your YouTube TV subscription. Follow the instructions provided on the screen, and before you know it — all HBO Max content will be available at your disposal.

This is easier than it may sound and before you know it, you will be streaming The Nevers like you’re in the U.S. But… you should NOT get a VPN for any single show. Rather…

Aside from letting you watch one series, a VPN has much more to offer. Arguably its most important feature is the ability to keep you anonymous online so that Facebook, Google, and various government agencies can’t follow you around.

A VPN does this by routing all Internet traffic through its global server network, and in the process all data coming to and from your devices gets encrypted. This same capability is how a VPN keeps you protected when using public Wi-Fi hotspots.

Considering that everyone wants a piece of our data these days, it is our belief that everyone should be using a VPN. Heck, that’s the main reason why we’ve created VPN Reports in the first place – to help folks like you get the right service for any need you may have.

To get started, visit our page with Best VPNs for HBO Max and make your pick. All services on that list have been tested for years and you can hardly go wrong by picking any one of them. Heck, even if you don’t like what you get – there is always an option to ask for your money back during the first 30 days (or so). It is one of those risk-free transactions that we love. 😉