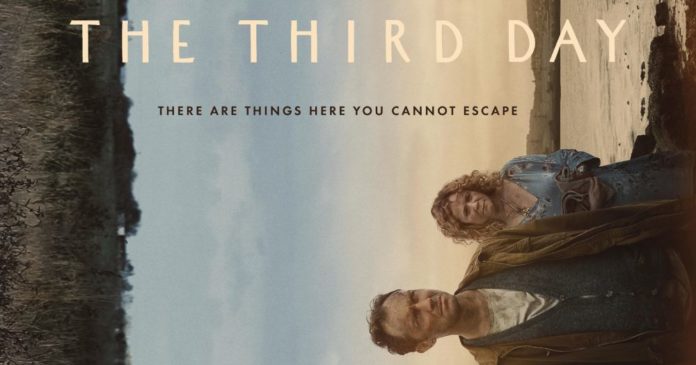 The Third Day is a new kind of TV show. Very weird and hard to describe. It is also rather amazing, and we love it…

If you want to join the (viewing) party, you may not be able to do that from all over the world. Except if you’re using a VPN. Which is what this article is all about. But first, let’s (try to) describe The Third Day for the uninitiated…

The Third Day for newbies

The series chronicles the individual journeys of a man and woman who arrive on a mysterious island at different times.

The production is split into three parts with three interconnected stories. The first, “Summer”, follows Sam (played by Jude Law), who is drawn to a mysterious island off the English coast where he encounters a group of islanders set on preserving their traditions at any cost.

The second part of the production, “Autumn,” is told during a one-off live event in London after the summer section of the show has been broadcast. Described as a “major immersive theatre event”, the live segment of the show will air in one continuous take and is intended to allow The Third Day fans to “inhabit the story as it happens”. It will feature Jude Law and other members of the series cast.

The third part of the series, “Winter,” follows Helen (played by Naomie Harris), a strong-willed outsider who comes to the island seeking answers, but whose arrival precipitates a fractious battle to decide its fate.

How to watch The Third Day online in the U.S.

If you have an HBO subscription, you can watch The Third Day at 9pm ET/PT every Monday. Otherwise, you’ll have to sign-up for HBO Max for $14.99 per month, and for that money – you’ll also be able to access all other great content that is available on HBO. We think it’s worth the money, but what do we know…

The situation complicates when you want to travel to other countries; then, you won’t be able to access HBO and any other video streaming service that employs geoblocking. In order to bypass those restrictions, you’ll need a VPN and use it to first connect to a US-based server and later stream all movies and TV shows you want.

How to watch The Third Day outside of the U.S.

If you live in Canada, you can stream the service through Crave, which costs $9.99 per month and also includes access to Crave Originals like Letterkenny.

In the UK, The Third Day is available to Sky subscribers on Sky Atlantic; and in Australia – with a Foxtel subscription on Fox Showcase.

From all over the world, you can watch The Third Day by getting a US HBO subscription. You’ll need a VPN in order to make that happen, first to sign-up for the service and later on to watch the show. It’s a rather simple process, though.

A VPN is useful on many fronts!

Using a VPN for accessing streaming services is cool, but the tool is up for many tasks.

To start, it will help you regain your privacy so you could anonymously surf the web. This means the Big Tech giants and various government agencies won’t be able to follow your digital footprint on the Internet.

Furthermore, because VPNs encrypt all data coming to and from your devices, they make connecting to public Wi-Fi hotspots much more secure. Without them, a malicious actor using the same Wi-Fi network could intercept your Internet traffic and potentially get ahold of your personal data.

And that’s just the tip of the iceberg. The main point is that with a VPN, you get more freedom, which — we think — is priceless.

Best VPNs offer apps for all popular devices and platforms, and even include the router support so you could protect your entire home/office network.

But since you’re into streaming services — you’re reading this article, after all — we suggest you start by checking our list of Best VPNs for Streaming. All of the services listed there have been field-tested and won’t let you down. Don’t wait, get a VPN today!