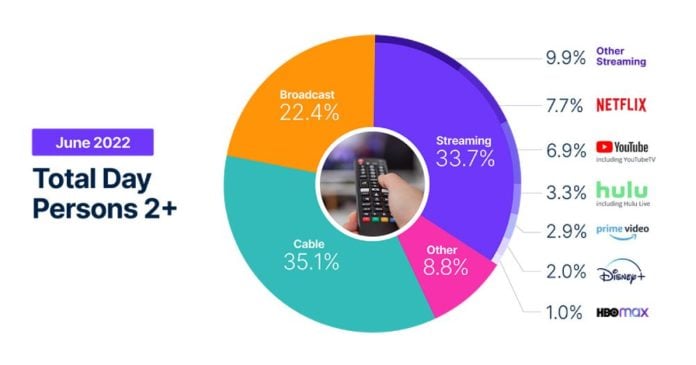 Guess we all knew streaming services will change our TV viewing habits, but so far, the good ol’ cable managed to keep up, albeit steadily losing market share from one month to the other.

In June of this year, however, the change was clear, with four of the top streaming platforms managing to attract record viewership shares and the streaming category in aggregate claiming more than one-third of total TV time. That, in case you wonder, is the largest share for streaming since the inception of Nielsen’s The Gauge in May 2021.

Nielsen has also found that even though TV viewing is seasonally lower in the summer months, total TV usage increased by 1.9% on a month-over-month basis — bolstered by a 7.7% increase in streaming, which raised its audience share 1.8 points to a new high mark of 33.7%. That’s 6.3 points higher than in June 2021!

In contrast — across broadcast (it rhymes!) — the official end of the TV season and a lack of new content resulted in a 6.7% decline in viewership and a loss of 2.1 share points between May and June 2022. The end of the traditional TV season affected drama the most, as viewing for this category fell 31% in June. Sports was a bright spot for broadcast, with the NHL and NBA finals taking place in June, driving a 43.8% spike in viewing.

Speaking of sports, it was also a factor in cable viewing, but for the opposite reason. With the NBA playoffs concluding on cable in May, sports viewing on cable fell 42.1%. That was too large a drop to be offset by the feature film category, which is always a notable contributor for cable.

In the end, we have to tell you that if you want to watch just about any streaming service – you can do that even if you don’t live in a country that is “supported” by the streaming service you’re after. Just get a VPN, and connect to the server in one of the “supported countries” and you’re good to go. To do that, check out our list of Best VPNs for Streaming and take it from there. Before you know it, you’ll be able to access more content than you can possibly watch. Grab some popcorn and enjoy! 😉