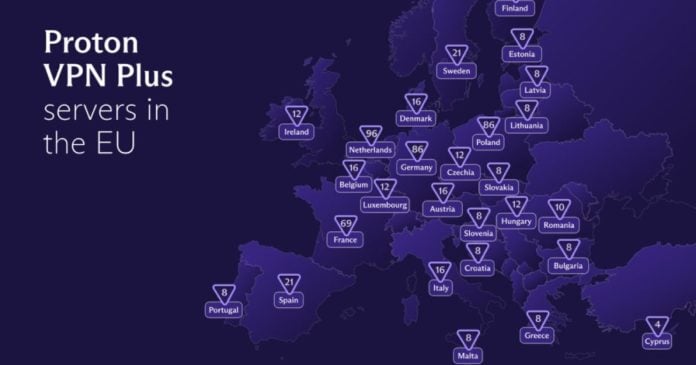 Proton VPN has hit a major milestone, having unveiled that it now has servers in all EU countries.

The announcement comes on the heels of the addition of servers in Croatia and Malta, which were the last two EU countries without a Proton VPN server.

As a result, users now have more choices than ever and can appear to the rest of the Internet as EU citizens. This, in turn, provides EU users with the best possible browsing speeds and also allows them to access local services as if they were back home.

All these servers are available to users of the Proton VPN Plus plan, whereas those with a free plan are limited to servers in the Netherlands.

Malta is Proton VPN’s first EU location to use Smart Routing, which is a technology that allows Proton VPN to offer VPN servers in countries they otherwise might not be able to service.

So when you connect to Proton’s server in Malta, you’re really connecting to a server physically located in Marseilles, France. However, despite the server not being located in Malta, Smart Routing provides the best performance for the largest number of users interested in accessing services based in Malta.

For what it matters, another country where Smart Routing is enabled is India, which makes sure that users can still get an Indian IP address without connecting to a local server. This is pretty important considering the new rules affecting VPN service providers that force them to have their data available to the government. Without a physical server in the country, Proton VPN (and a few other VPNs) can keep their users’ privacy protected in India.

Proton VPN is a rock-solid service

That’s why we highly recommend it… And with the addition of new servers in the EU, it could be just the VPN service you’ve been looking for.

So if you still haven’t found a VPN for yourself yet – consider giving Proton VPN a try. As mentioned above – there is a free plan to give you a taste of the service and you can always upgrade at a later date. Check it out.