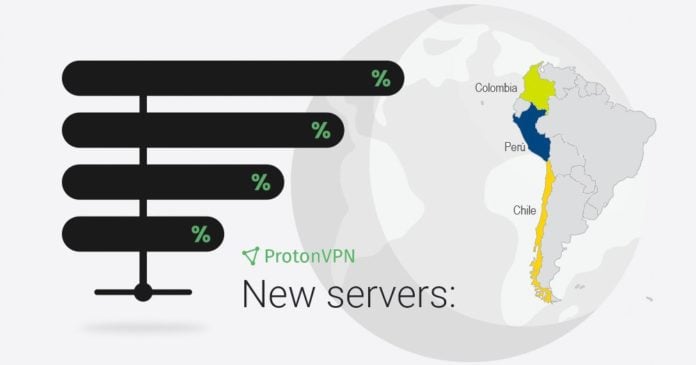 Don’t you love it when already great services become even better? That is the case with ProtonVPN which has just recently expanded its footprint in South America.

As part of the plan, the company installed servers in Chile, Colombia and Peru — bringing its country count to 54.

Where are the servers installed?

In all three cases, 3 servers are available on ProtonVPN’s Basic plan and the remaining 5 – on the company’s Plus and Visionary plans.

As that’s usually the case, new servers increase ProtonVPN’s capacity for users, making their connections that much faster. Also, they allow those with virtual residences in the mentioned countries of South America to get a local IP address to access geo-restricted content and services.

For example, servers in Chile let users stream content from the website of the Canal 13 TV channel. Or — if you are currently located in Chile, Colombia, or Peru — using one of the new VPN servers will help protect your online activity from surveillance by ISPs and network administrators. This, in case you wonder, is especially important when connecting to public Wi-Fi hotspots.

ProtonVPN was developed by the same team that created ProtonMail, which is the largest encrypted email service. All of its apps are open source and have undergone a thorough audit by the security firm SEC Consult.

Anyone can review ProtonVPN apps’ code and ensure they do exactly what we claim they do. This transparency also enhances the apps’ security, as cybersecurity experts from all over the world can now scrutinize the code.

As of this writing, ProtonVPN network includes more than 1,000 servers.