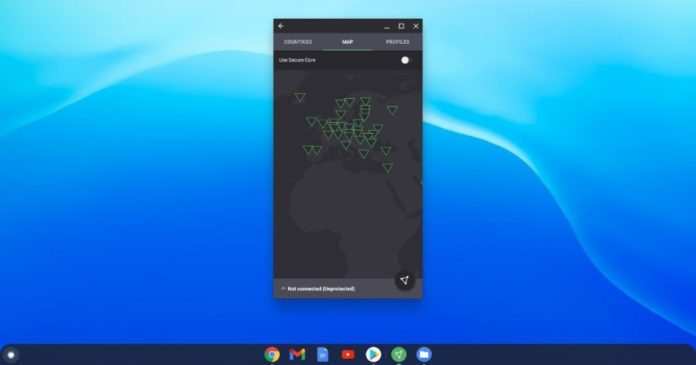 It works through ProtonVPN’s Android app that can be started on a Chromebook to unblock censored content, securely stream your favorite shows, and protect your internet connection on public Wi-Fi hotspots.

How to install ProtonVPN on your Chromebook?

The easiest way to get ProtonVPN’s Android app for your Chromebook is to grab it directly from the Google Play Store — which is something most Chromebooks support and even come with the Play Store preinstalled.

Alternatively, if your Chromebook doesn’t have the Play Store, you can grab the APK file from ProtonVPN’s download page, GitHub, and F-Droid, the last of which is the largest repository of free and open-source Android APKs.

Once you have installed the app, it will appear in your app menu. Double-click on it and log into your account — or create a new one.

There is a limited, free version of ProtonVPN you can use to try out the service — though we don’t suggest sticking to it for long. You’ll see that it doesn’t deliver the “goods” at all times.

In any case, once you’re logged in – select the country and server you would like to connect to, and you’re good to go.

Using ProtonVPN on a Chromebook

Google is the owner of the Chrome OS operating system, making it difficult for any company — including ProtonVPN — to limit Google’s ability to monitor your activity on a Chromebook. Because of this, ProtonVPN says it may be less effective at hiding your location and thwarting trackers.

Nevertheless, ProtonVPN for Chromebook allows you to:

And that’s just a start with a single ProtonVPN subscription also letting you run it on other devices — thus helping keep your Internet whereabouts under the radar. Check it out.