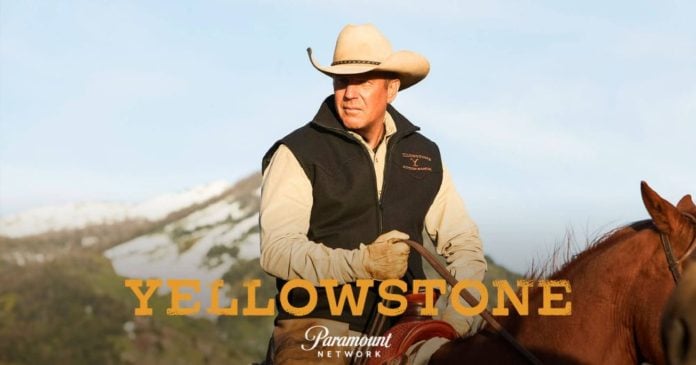 The Yellowstone TV series is an epic drama about the Dutton family, who controls the largest contiguous ranch in the U.S. As such, this ranch is under constant encroachment by those it borders. And so the idea for the show was born, depicting the world far from media scrutiny — where land grabs make billions, and politicians are bought and sold like it’s nobody’s business.

Add many famous actors to the mix and you get a winning TV show, which — unsurprisingly — users from all around the world want to watch but can’t. Actually they can with a VPN and a few other tricks.

But before we reveal you can join the “Yellowstone party,” let’s first describe the show for those who haven’t heard of it…

What’s Yellowstone all about?

Yellowstone is an American drama television series that premiered on June 20, 2018 on the Paramount Network. It follows the conflicts along the shared borders of a large cattle ranch, an Indian reservation, and land developers. Among the series’ stars are Kevin Costner, Wes Bentley, Kelly Reilly, Luke Grimes, Cole Hauser, and Gil Birmingham.

Yellowstone follows the Dutton family, led by John Dutton, who controls the largest contiguous ranch in the United States. The ranch is under constant attack by those it borders — including land developers, an Indian reservation, and United States of America’s first national park. It depicts a violent world far from media scrutiny, where land grabs earn developers billions, and politicians are bought and sold by the world’s largest oil, natural gas, and lumber corporations; “where unsolved murders are not news, they are a consequence of living in the new frontier.”

How to watch Yellowstone online from all around the world

Yellowstone seasons 1 and 2 can be watched from Vudu and Google Play. The series is available on Paramount Network, CMT and TV Land — and in order to watch the latest episodes online, we suggest you use Sling TV.

Sling TV Blue package costs $30 per month and includes content from 49 channels, Paramount Network being one of them.

In addition, if you’re not accessing Sling TV from the US, you will need a good VPN to bypass filters imposed by the content rights owners that prevent people from all around the world from accessing the show — and Sling TV’s service.

In order to do that, you will first have to connect with a VPN to a US-based server and only then sign-up for the service. If you don’t have an American credit/debit card, you will have to pay with a Sling TV gift card. The best place to get one is from MyGiftCardSUPPLY.com. Once you have it, you can pay for Sling TV’s service using that gift card. Then, you can watch Yellowstone as much as you want. As well as any other content that is available through Sling TV.

A VPN can do other things, as well

In addition to letting you access Yellowstone and other geo-restricted content, a good VPN lets you do many other things, as well. The most important, however, is that you get to regain your privacy, making it next to impossible for governments and corporations to follow you online. This in turns means you get to anonymously browse the web, download files via BitTorrent and do just about anything you ever wanted without worrying that someone’s always watching behind your back.

Furthermore, you get to stay connected to popular news sites and social media services while traveling to high-censorship countries — where that may not be possible without a VPN. Plus, connecting to public Wi-Fi hotspots is no longer a risky endeavor, with VPN encrypting all communication between your device and the server (website).

All in all, with a VPN — you get more freedom. And that, we think, is rather important. So yes, you need a VPN and you need it now. Start by going through our list of Best VPNs for Streaming and thank us later.