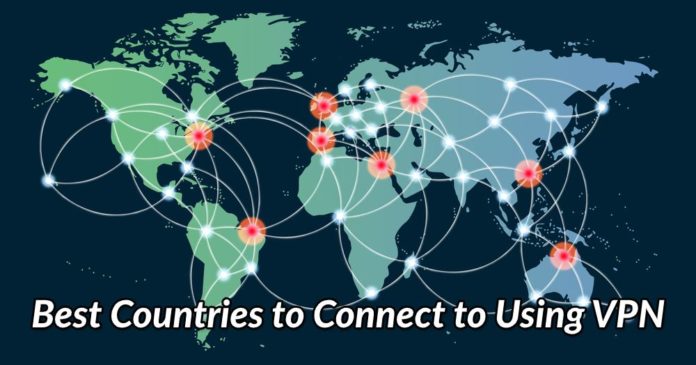 Depending on what you do, you’ll want to connect to the server in different countries. For instance, if you want to access US Netflix, you will select a US-based server. Similarly, for Disney+ – you will go for the server in the country where the service has been made available (and where you also happen to have an account).

However, if you’re primarily concerned with your privacy, you’ll want to go for a server in a country that has solid privacy laws. And that’s what this article is all about — to highlight the best countries to connect to with a VPN for privacy addicts (which, BTW, includes the truly yours). Cause, privacy-wise, not all countries are made equal with some doing a better job of protecting personal data than others.

So without further ado, here are the best countries to connect to using VPN:

Switzerland has long been at the top of the list of countries with good privacy laws. In fact, it is well known for its secret bank accounts that were used by people all around the world for, let’s call them, “tax purposes.” The country’s privacy laws are similarly strong, and the fact that Switzerland is not part of the European Union makes it that much better — because the EU countries share data with each other, as well as some other parties from the Five Eyes alliance (and other such alliances). This means that Swiss authorities won’t respond to other countries when asked to hand over sensitive data.

For VPN users, it is important to know that in 2011 the country’s officials said that unauthorized file sharing is actually not a problem and that it allows for downloading copyrighted content for personal use. This, coupled with the fact that Switzerland has a very strong economy, makes it one of the safest countries to connect to with a VPN.

If Switzerland is number one, Iceland has the second spot in this list as one of the safest places in the digital realm. The country may have a few problematic laws but its authorities have already demonstrated their unwillingness to join international intelligence sharing deals such as the mentioned 5, 9 and 14 Eyes Alliances.

One of the key internet legislations in the country is the 2015 Equal Access Act, which is very similar to the US’ Net Neutrality — which was sadly repealed at the end of 2017. The set of laws Iceland introduced forced data service providers to ensure unrestricted and unbiased access to all citizens of the country. In addition, another law — the Data Protection Act — is also in favor of protecting the citizens.

On the downside though, Iceland has data retention laws that force telecommunication companies to keep records for up to six months. The good news is that this law is used only in matters of public safety and criminal cases. Therefore, VPN users have no reason to worry about it.

Although the situation with freedoms could be better in Malaysia, we gotta add it to the list thanks to the country’s rock-solid Personal Data Protection Act (PDPA).

Introduced in 2010 and revised several times since then, the law contains several key points that protect personal data from being misused. What makes it particularly interesting for VPN users is that PDPA does not apply only to companies established in Malaysia — but also to those using equipment in the country to process personal data. In other words, when you connect to a server in Malaysia, your web whereabouts will be protected by this law.

While Romania is part of the European Union, it is not in compliance with all of its laws, one of which is EU’s 2006 Data Retention Directive. The Constitutional Court of Romania nulled those laws in 2009, saying they were violating Romanian citizens’ rights to privacy. Then in 2012, a new set of similar laws was enacted only to be repealed again in 2014. This makes Romania the only country in the EU to have had its Data Retention Laws repealed by the highest courts.

For what it’s worth, copyright infringements are widespread throughout the country as it is still a low priority for Romanian persecutors — it is a victimless crime, after all. And Romania still has some serious catching up to do with the rest of the EU before it can put more energy into such advanced laws — its economy isn’t as strong as those of the countries in the West.

Another EU country on the list that has its own laws for data protection in addition to the EU-wide GDPR. What makes it neat for VPN users is that said laws are applied to both local businesses as well as those that have equipment located in the country.

In addition, the country has relaxed rules on breaking copyright laws and will only punish those who aim to profit from files downloaded via BitTorrent. Occasional movie pirates have a free pass for now.